Journalism, 'Fake News' and Disinformation: A Handbook for Journalism Education and Training

As a part of the “Global Initiative for Excellence in Journalism Education” UNESCO published an handbook on journalism and disinformation that can be used as a model curriculum. 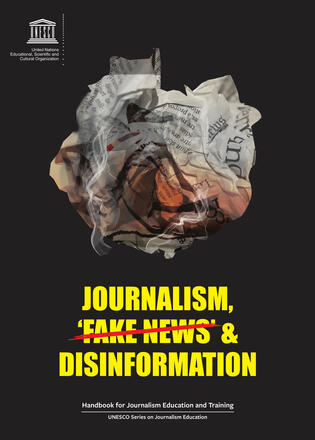 A Short Guide to the History of ‘Fake News’ and Disinformation

After a foreword and an introduction, the handbook is organised in seven modules, each including synopsis, outline, module aims, learning outcomes, module format, suggested assignments, readings and, when relevant, materials.

The first module, Truth, trust and journalism: why it matters, is about how journalism can serve society and democracy.

The second module, Thinking about ‘information disorder’: formats of misinformation and disinformation, criticise the expression “fake news”, which is described as an oxymoron in the foreword, because information that is not verifiable and in the public interest does not deserve the label of news.

The handbook instead distinguish:

Instead of “fake news”, “information disorder” can be used as an umbrella term to include also satire and parody, false connection (e.g. click-bait), misleading content, false context (e.g. a genuine photo claimed to have been taken in a different place or time), imposter content, and manipulated and fabricated content.

Module five, Fact-checking 101, explains that fact-checking can be done before publication (in the newsroom as a part of the editorial process) or ex-post, e.g. on declaration by politicians. The module concentrates on this second meaning, which has grown in the recent years. The module also deals with verification, which is similar to fact-checking, but is done ex ante, mostly on user generated content.

Module seven, Combatting online abuse: when journalists and their sources are targeted, teaches how to recognise and responding to ‘Trolling’ and ‘Astroturfing’, and self-defense from digital safety threats.