Journalist Security in the Digital World: A Survey

The digital world turns journalism into a riskier profession, but it can also make it safer. Digital technology can offer tools to minimize the dangers. How do journalists get along with risks and opportunities? 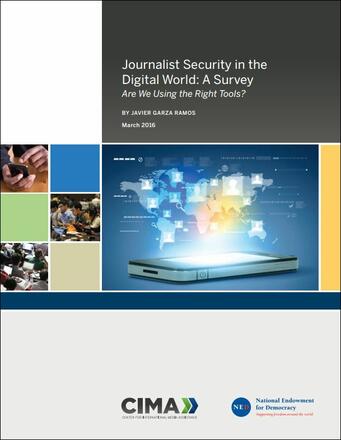 The Center for International Media Assistance carried out a survey directed at  journalists around the world, asking them about their use of digital tools for their security. The survey looked at whether or how journalists use digital tools for different activities: protecting communications, securely storing or sharing files, encrypting their digital devices, allowing trusted networks to track their location during a risky assignments, carrying out risk evaluation and analysis before a dangerous assignment.

Out of the 154 journalists surveyed across the world, about 60 percent of respondents reported not using digital tools for security. Responses reveal geographic disparity in the use of digital security measures, while some journalists mentioned using applications that have weak security or are not secure at all.

A certain habit to protect online communications emerges among respondents to the survey: as highlighted in the report, 30% of surveyed journalists regularly use such tools.

“The journalists that protect their communications mentioned tools such as the encrypted web-bases services Riseup and Hushmail , several providers of PGP encryption for e-mail, encrypted messaging services like Peerio , Chatsecure and Textsecure , as well as Jitsi , Cryptocat , Adium , which are not for mobile devices. Redphone is used for encrypted Voice over IP. [...] Some respondents also said they communicates with colleagues over a Virtual Private Network or using the Tor browser for hiding their location”.

Also in the field of file storage and sharing, a 30% of respondents report to use digital tools to protect their files when storing them or sharing them with colleagues.

“The tool most mentioned by respondents is TrueCrypt, the same encryption system used by Snowden, but most of the journalists that use it are in Western Europe and North America. After TrueCrypt , the most mentioned tools were Spideroak and Tresorit , for storing and sharing on clouds; OnionShare , a new application for file-sharing that sends data over the Tor network. Other respondents said they use Web-based tools such as SecureReporter , the website managed by ICFJ to share information between journalists working on collaborative projects.”

As far as device encryption is concerned, only 17% of respondents adopt such protective measures. An even lower percentage (10%) is recorded when it comes to the use of geo-tracking tools, such as mobile apps that enable journalists to report their locations to trusted networks in risk areas.

The report is complemented with a list of online resources, making available hubs of information for journalists before going on assignment.