Make Yourself Useful: Six simple things your newsroom can do for democracy

This research paper puts forward a set of relatively simple adjustments that can be done in newsrooms to help editorial media serve democracy better in the new media ecosystem, based on interviews with 18 leading figures in media and academia 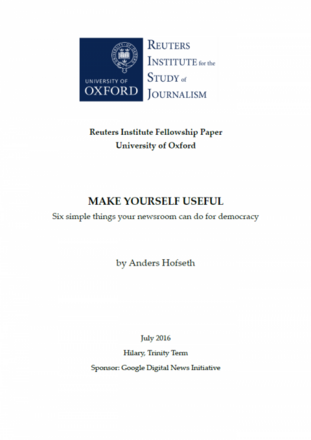 TV, radio, newspapers and online media have historically provided society with a common foundation, ensuring the flow of information, offering an arena for debate – and a handful of other functions vital to democracy.

Changes in media and media use are changing the game. In particular, the rise of the so-called attention economy brought on by online media and social media impacts the ways traditional media can perform their democratic functions, and parts of society are decoupling from the old news media.

The younger half of the population is abandoning traditional news faster, but there are changes across the board. Research interviews suggest that the new media environment in some ways actually is improving opportunities for a well-functioning democracy, but that traditional media have developed some dysfunctional and outdated practices, and should adapt to be able to benefit democracy.

This research focus is on practices that can be applied within most larger newsrooms without major changes, giving closer advice on topics such as: properly understanding social media, fact checking and overview, and common mistakes that should be avoided.

The most rational approach for traditional, public-spirited media wishing to uphold democracy, would therefore seem to be to embrace social media, and utilise them as instruments for performing tasks for democracy, but also to try to fix shortcomings in the new ecosystem. This will need to be done on terms largely dictated by the existing culture and practices in social media.