A handbook to assist judges, prosecutors, lawyers and human rights’ defenders in ensuring that all cases involving freedom of expression (FoE) are handled in conformity with states’ obligations under Article 10 of the European Convention on Human Rights (ECHR), as developed by the Strasbourg Court 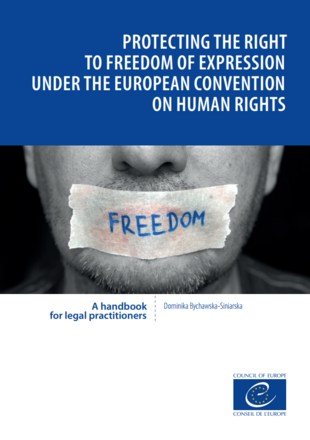 This publication begins elaborating some general considerations: freedom of expression (FoE) is a right in itself as well as a component of other rights (e.g. the right to assembly). It can conflict with other rights protected by the European Convention on Human Rights (ECHR), when authorities need to protect the interests or values listed in Article 10 (2) ECHR, such as national security or public health. When such conflict occurs, the Strasbourg Court strikes a balance in order to establish the preeminence of one right over the other. After analysing the two paragraphs composing Article 10 (rule and exceptions), the author speaks about the right to access and receive information that was first developed in Article 8 cases relating to environmental problems (e.g. Gaskin v. the United Kingdom, 1989), and of the types of protected speech.

The second chapter of this handbook explores the duties under Article 10: the exercise of FoE carries with it duties and responsibilities. In particular, several judgments refer to the responsibility of civil servants in expressing their ideas (Rommelfanger v. the Federal Republic of Germany, 1989). Moreover, when restrictions of the right to freedom of expression are in the interest of defending “national security”, member states must define the latter concept in a strict and narrow way and prove the existence of a real danger.

The author then underlines that there are some forms of unprotected speech: it is the case of hate speech and expressions inciting to violence, where there is a real possibility that violence occurs (Sürek v. Turkey (No. 3), 1999).

Thus, there is a system of restrictions within the exercise of the right to freedom of expression: they must be prescribed by law and necessary in a democratic society, for the legitimate aim to protect other interests such as national security, public health and the reputation of others (three-part test). The author reminds that the range of possible restrictions is very wide, but censorship prior to publishing is seen by the Court as the most dangerous (RTBF v. Belgium, 2011). Instead, among the possible post-expression interferences, criminal conviction and sentence are considered the most dangerous. Confiscation or seizure of the means through which information and ideas are disseminated, the prohibition of advertising and the orders to reveal journalistic sources and documents are also reminded.

The handbook continues listing the public reasons that can lead to limitations of free expression, namely national security, territorial integrity, prevention of disorder or crime and morals. Instead, as to the limitations due to others’ reputation, such restriction has often been invoked to protect politicians and civil servants against criticism. Consequently, a media’s privileged position derived from the Court’s view of the central role played by political expression in a democratic society: severe and harsh political criticism has to be tolerated.

The author also sums up the Court’s six criteria established in the case of Axel Springer AG v. Germany (2012) for balancing FoE with the right to private life: the contribution to a debate of general interest; how well known the person being reported on is (politician, high-ranking official or civil servant) and the subject of the report; the person’s prior conduct; the method used to obtain the information; the veracity, content, form and repercussions of the report (e.g. the use of vulgar phrases in itself is not decisive in the assessment of an offensive expression as it may well serve merely stylistic purposes); and the penalty imposed.

It is reminded that a distinction should be made between information (facts) and opinions (value judgments), as to the necessity of a “truth's proof”. Criminal penalties, in particular imprisonment, should be avoided: also, the mere fact that such sanctions could be applied has substantial undesirable effects (chilling effects, self-censorship).

Finally, the author explores the balance between FoE and religious freedom.

The chapter dedicated to freedom of expression and the media analyses one of the appendixes of this right, namely freedom of the press. The press is considered a “public watchdog” (Lingens v. Austria, 1986). Article 10 ECHR provides some positive obligations of the state: states must ensure effective protection of free expression and journalists (Özgür Gündem v. Turkey, 2000). Moreover, with regard to radio and television broadcasting, they have to guarantee the liberty and pluralism of information. However, this handbook also mentions the duties and responsibilities of journalists. Finally, the author analyses the state of the art regarding the protection of journalistic sources and whistle-blowing.

The last chapter focuses on the relationship between FoE and new technologies: the field of surveillance affecting journalism is continuously evolving (e.g. Bureau of Investigative Journalism and Alice Ross v. the United Kingdom, under examination). Moreover, there is a positive obligation on states to create an appropriate regulatory framework to ensure effective protection of journalists’ freedom of expression on the internet (Editorial Board of Pravoye Delo and Shtekel v. Ukraine, 2011). Notably, internet access has been accepted as one of the individual rights under Article 10.