In this booklet, prepared for the Protect the Protest task force by the Civil Liberties Defense Center, EarthRights International, the First Amendment Project, and Greenpeace USA, activists and journalist can find concrete help through comprehensive information, definitions, and questions about strategic lawsuits against public participation 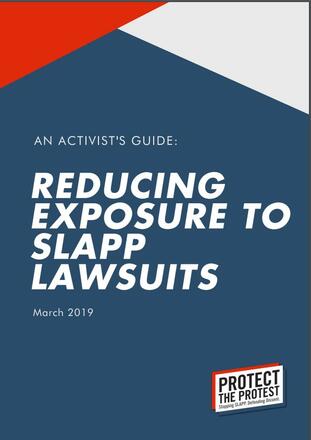 The Protect the Protest task force, a coalition of public interest organisations committed to ending the threat posed by SLAPPs, was created in 2018, though strategic lawsuits have threatened freedom of expression since the 1970s.

This “activist’s guide” provides definitions, suggestions, and a legal background to defend oneself and get help.

According to the commonly accepted definition of SLAPP, these lawsuits “are used to bully and silence those who speak truth to power” and the plaintiff’s hope is that “the lawsuit will scare away other activists”.

The guide mentions the First Amendment (internationally corresponding to the right to gather, protest, speak about any topic - in short, freedom of expression) and its limitations according to the law (defamation, incitement to violence, threats), and then gives some recommendations on how to prevent SLAPPs, such as accuracy in communications to the public, caution when talking about companies, and developing relationships with the right lawyers.

The “What to do” section is divided into two cases: if you are threatened and if you are sued, as SLAPPs are efficient also when a lawsuit is not filed, but just a possibility.

In the conclusion, the guide lists some key instruments provided by Protect the Protest: