A toolbox for journalists covering extremely violent conflicts in other countries, but especially in their own communities 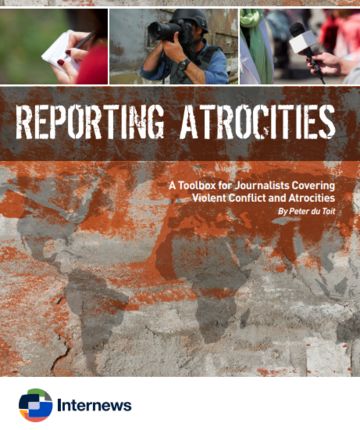 The general aim of the toolbox is to provide journalists reporting on conflicts and their violent manifestations with insights they can draw on in making a constructive contribution to the eventual peaceful management and resolution of conflicts through their reporting. The manual comprises eight parts.

Part One explores some of the key assumptions that underpin the overall conceptualisation of the document. It states that conflict-sensitive journalism should go hand in hand with a set of assumptions about good professional standards. These are presented as the fundamentals to draw on so that news media can contribute constructively during times of conflict.

Part Two focuses on key issues intended to enhance journalists' understanding of conflict. Stating that reporters should go beyond simply describing the conflict event, the author points out the importance of understanding the conflicts while creating a comprehensible narrative for the audience. The chapter looks specifically at the causes and dynamics of conflicts, exploring how parties’ approaches to conflict influence potential outcomes. Finally, it touches briefly on a range of interventions which can help to transform conflict.

Parts Three and Four focus on violence and atrocities. The journalist’s task becomes increasingly difficult and potentially more important when conflicts become violent, because the impact of violence on people re-orientates the dynamics of the conflict. The section underlines that, when the situation is potentially volatile, the reporter is expected to ask questions about the level of risk and raise questions about steps that can be taken to prevent violence. Asking these questions is part of the information-gathering and storytelling process. The answers of leaders about their efforts of ensuring a non-violent situation, when published, make it possible for the public to hold them accountable.

On the other hand, part six presents practical strategies for covering violent conflicts and atrocities. Journalists have a great deal of responsibility when reporting in times of severely heightened conflict, because "getting the story wrong can have real consequences". To avoid such mistakes, reporters can take proactive steps to prepare for reporting on conflict by:

In the same chapter, the author points out that "how we choose to frame conflicts can shape the way people understand them and the way in which parties elect to respond to the media. If we insist on reporting on conflicts as competitions in which there must be winners and losers, it is possible that we influence our audiences to think of them in this way. If this is the case, then every concession made by one party is likely to be seen as a victory for the other side; consequently, leaders are likely to avoid making concessions fearing that they may appear weak to their constituencies".

Thus, some insightful suggestions are given to journalists to help them avoid such vicious circle. These include:

Secondly, when conflict has already broken out and atrocities are being perpetrated, there are other principles to respect in order to report constructively:

Part Seven looks at steps journalists can take to protect themselves both physically and emotionally when reporting on conflict, also quoting other relevant guides, such as Reporters without Borders' "Handbook for Journalists" and Committee to Protect Journalists' "Journalist Security Guide: Covering the News in a Dangerous and Changing World".

Part Eight offers some suggestions for editors who are responsible for supervising journalists who are reporting on conflict.