Publication Date: May 2015
Research and Editorial Team: Boris Timoshenko, Yuriy Lukanov and Oliver Money‐Kyrle
Link: Safety and solidarity for journalists in Ukraine 2014: a handbook for journalists unions facing a crisis 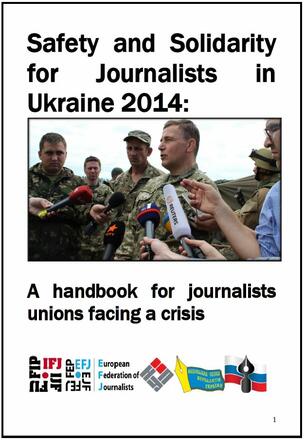 The report goes through events unfolded in Ukraine since November 2013, highlighting the effects that these had on the risks and possibilities for journalists to keep carrying out their work in the country.

Eight journalists were killed in Ukraine in 2014. Seven died during the war in the Donbass and one during the Kyiv Maidan. Journalists and media professional have been the target of many different threats and challenges while working to report the Ukraine conflict, including restrictions to freedom of movement, detentions, threats, assaults, and even death. This report examines challenges faced by journalists in their work, and efforts made to overcome such issues.

The first part of the publication looks at the efforts and difficulties faced by Journalists' Unions in defining common guidelines and positions across the border. The report then turns to personal accounts by journalists who have experienced in first person harsh reporting conditions within the Ukrainian conflict. A comprehensive review of casualties and violations of journalists' rights and safety then complements the text, together with a list ofrecommendation elaborated by reporters who have experienced the Ukraine conflict in first person.