On 13 July 2022, the European Commission adopted the third Rule of Law Report, which includes 27 country chapters and new recommendations to each Member State 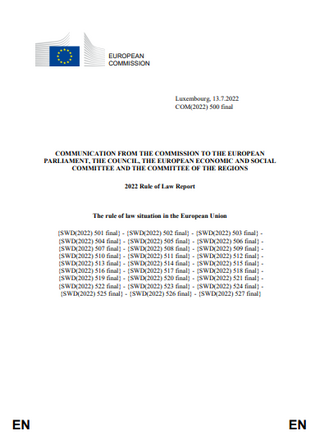 The Rule of Law Report monitors significant developments across EU Member States in four key areas: the justice system, the anti-corruption framework, media pluralism and media freedom, and other institutional issues related to checks and balances. The 2022 report covers for the first time new topics such as public service media and the implementation of judgements of the European Court of Human Rights.

The biggest new feature of this edition is the inclusion of country-specific recommendations , as announced by President von der Leyen in the 2021 State of the Union address. The recommendations aim to assist Member States in taking forward reforms and identifying areas where improvements are needed, with a view to address systemic challenges. The 2023 edition will assess the implementation of the recommendations.

The 2022 Rule of Law Report shows that important reforms took place in many EU countries, but important concerns remain in others. A closer look at the media pluralism and media freedom area reveals that: