2022 Rule of Law Report: country chapter on the rule of law situation in Italy

The 2022 country chapter on the rule of law situation in Italy analyses four key areas: the justice system, the anti-corruption framework, media pluralism and media freedom, and other institutional issues related to checks and balances 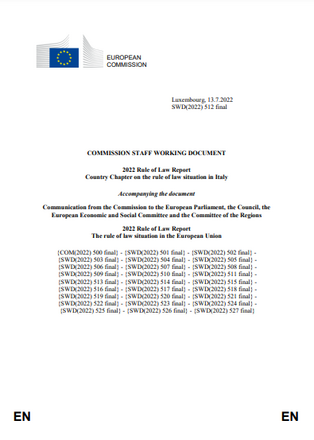 The biggest development with regard to the justice system is the adoption of comprehensive reforms of civil and criminal justice, aimed at improving its quality and efficiency.
Looking at the anti-corruption framework, legislative proposals aimed at preventing corruption (on whistleblowers protection, conflict of interest and lobbying) are still pending.
Although media pluralism and media freedom are protected by a solid legislative framework, concerns remain with regard to working conditions, protection of sources, professional secrecy and SLAPPs.
No developments regarding the establishment of a National Human Right Institution have been recorded. Finally, the European Commission recognises the fact that the civic space remains narrow, in particular for the organisations that deal with migration.

Taking a closer look at the third pillar of the Rule of Law Report, the European Commission recommends to Italy to reform the regime on defamation, protect professional secrecy and safeguard journalistic sources, taking into account the European standards.

As stressed above, freedom of information and freedom of expression, as well as press freedom and the principle of transparency of media financing, are guaranteed by the Italian Constitution. The detailed legislation on state advertising allows the country to score a low level of risk in this indicator of the Media Pluralism Monitor 2022.
Public service media (RAI) is regulated by a layered monitoring system. The media regulator AGCOM ensures the respect by RAI of content rules. However, the European Commission denounces the failure to substantially reform the process of appointment of the PSM board of directors in order to defend it from political influence.
The reform of defamation provisions remains a key area of concern. After the Constitutional Court ruling on the question of inconstitutionality of the penalty of imprisonment for press defamation, the Italian laws regulating libel have not been amended.
Threats and attacks against journalists continue to rise. Particular areas of concern remain court proceedings and intimidations while covering Covid-19 related events. The Coordination Centre is recognised by stakeholders, including the MFRR partners, as a positive example and a good practice, but additional measures should be considered under its remit.
Looking at employment conditions, the gap between employed journalists and freelancers is growing.