Commissioned at request of the European Parliament LIBE Committee, this study examines existing distortions in media pluralism hampering the proper functioning of democracy and it proposes enforceable actions to correct the deficiencies found 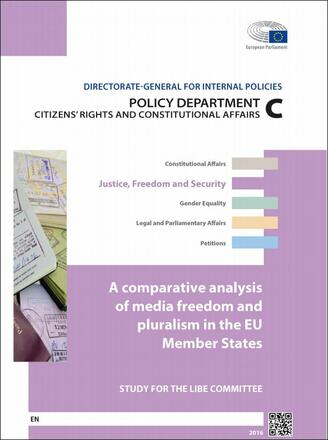 As the basic conditions of media pluralism are not met in many Member States (MSs), and distortions in media pluralism hamper the proper functioning of democracy, the EP has commissioned this report to compare structural condition within 7 Member states. The result is an in-depth examination which, bearing in mind the different political and social systems of the Member States, provides concrete measures to enforce the principles guaranteeing media freedom and pluralism within the EU, including enforceable and systematic actions.

This study conducted comparative research on seven Member States of the European Union: Bulgaria, France, Greece, Hungary, Italy, Poland and Romania. The MSs were specifically selected on the basis of previous research results that showed political pluralism at high risk, accompanied by heavy state interference in the media, or close economic ties between the political sector and private media owners.

Research on media freedom and pluralism has traditionally focused on the growing power of transnational media companies, which push media systems towards increased market concentration. The authors of this report indeed point out that the examined media systems suffer from a web of non-transparent relationships established in an interconnecting network of political and economic power, which in some countries is provoking systemic failure of the media market and is linked to the dysfunction of democracy.

The weakening media sector is examined in the 8 countries considered, also against the background of the financial crisis, the digital transformation and its effect on media financing and user behaviour.

The study identifies existing EU competences that can be used to make legislative changes to protect and maintain media freedom and pluralism within EU MSs.

While media freedom and pluralism are explicitly referred to in the Charter of Fundamental Rights of the EU, provisions enshrined in the Charter are directly applicable only in cases where the Member State acts in the scope of EU law. MSs' obligation to ensure pluralism hence includes 1) refraining from interference that would distort the market and 2) ensuring that a plurality of opinions is present in the media market by enacting the necessary legislation. With no explicit competences to regulate media pluralism conferred, the EU can attach consequences to not respecting the EU values enshrined in Article 2 TEU and the Charter of Fundamental Rights of the EU. It can also adopt measures when fundamental rights, state aid and the internal market rules are violated.

This study strongly advises that, while keeping in mind the constraints of EU competencies and the difficulty of reaching consensus among MSs on detailed regulation, any attempt to address the adequacy of media freedom and pluralism on a European level should become part of a regular process of democratic scrutiny. To this end, the authors put forward the following six policy recommendations.

1) A regular, biennial assessment of potential risks to media pluralism should be carried out in each Member State by an independent committee of experts appointed by the European Commission. Monitoring can be performed under the framework of the Fundamental Rights Agency (FRA) or a Rule of Law framework. Monitoring actions would result in enforcement procedure, according to either Article 258 TFEU, Article 7 TEU or the newly designed pre-Article 7 procedure.

2) A specific Directive on state aid to the media sector should be adopted that would set out the principles of providing state aid to both commercial media outlets and to public service media.

3) The Audiovisual Media Services Directive (AVMSD) should be amended to include an obligation on MSs to achieve and maintain pluralism using their own instruments, and a clear definition of the elements of pluralism.

4) Each MS should create and maintain a transparent database containing all direct and indirect owners of media companies up to the natural persons, easily accessible to the public and searchable through various filtering and ordering algorithms.

5) The E-commerce Directive should be updated in order to relieve platform providers of any liability for third-party content and to harmonise the divergent MS jurisdictions in this regard. Planned amendments to AVMSD directive concerning video-sharing-platform-providers should avoid chilling effect on sharing user-generated content (UGC). To this end, the liability for content should be assigned to actors who actually contribute the content.

6) Educational projects should be undertaken as preventative policy instruments to support the long-term goal of building a free, pluralistic and democratic media system, including three targeted areas: i) democracy and fundamental rights, ii) media and digital literacy and iii) journalistic ethics.

7) Further follow-up and additional research should be encouraged and supported.