The aim of this working paper is to present a ranking of European Union Member States, Montenegro, and Turkey in terms of media pluralism and to compare the Media Pluralism Monitor ranking with the scores and rankings provided by the indices of Reporters without Borders and Freedom House related to the same EU and accession countries

Publication Date: January 2018
Publisher: Centre for Media Pluralism and Media Freedom
Research and Editorial Team: Elda Brogi, Pier Luigi Parcu
Link: A comparison of a new index based on the Media Pluralism Monitor with some other indices ranking freedom of expression 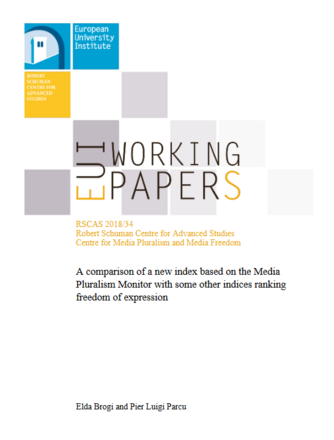 Since 2013, the Centre for Media Pluralism and Media Freedom (CMPF) at the European University Institute (EUI) has annually assessed and scored the risks to media pluralism and media freedom in EU member states and some candidate countries using a complex measuring tool, the Media Pluralism Monitor (MPM). The paper uses the MPM results 2016, published in 2017, and the findings of Reporters without Borders and Freedom House published in 2017.
The four scores (Basic Protection, Market Plurality, Political Independence, and Social Inclusiveness) are averaged to propose a new “ranking” of the risk to media pluralism in the countries examined by the MPM.

The paper states that the methodology used for the Media Pluralism Monitor differs from the methodologies used by Reporters without Borders and Freedom House, which are more similar to each other in compiling the rankings on freedom of expression.  According to the paper, the MPM uses very high benchmarks and thresholds in line with the standards expected in the EU, while FH and RWB tools were created to analyse the situation of freedom of expression and media pluralism worldwide. However, the legal theoretical framework looks very similar, as it is based on international standards for freedom of expression.

The paper argues that, being limited to the EU and candidate states, the MPM can rely on homogeneous datasets on some specific topics and on a common legal framework. According to a preliminary statistical analysis, the MPM results related to the common exogenous factors, like the country’s population or the GDP per capita, are easier to understand and less biased than the others.