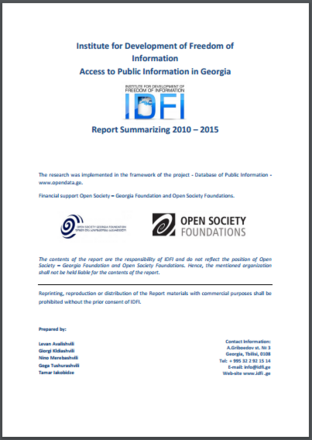 This report by the Institute for Development of Freedom of Information (IDFI) focuses on the access to information in Georgia, analysing data from the period 2010 – 2015.

The analysis considers the number of requests for information and how they were complied with. Cases are sorted into four possible replies: “complete”, “incomplete”, “refusal” or “no reply”. Data for replies expressing “unavailability of the requested information at the institution concerned”, “requests forwarded to other institutions” or “no implementation of that particular action” were also collected, but subsequently excluded from the diagrams, which analyse only actual replies.

Results show that availability of data on the topic has increased substantially from 2010, and that public institutions in Georgia have improved their accountability levels. While in 2010 only 33% of the requests were satisfied with a “complete” reply and 14% of the requests were left unanswered, in 2015, 70% of the requests were given a “complete” reply, while 8% did not receive any sort of answer. Although there has been substantial improvement since the database was established, 2015 was not the best performing year for the Georgian public institutions. From July, 2012 to June, 2013, the number of complete replies was the highest recorded, at 79%, while the number of refusals was the lowest, at 1% (equally low for 2015). According to the report, this period of time coincided with the 2012 Parliamentary Elections, and they proved to be a strong drive for the institutions to provide information. Unfortunately, this positive change was temporary, and the amount of complete replies fell back to the previous levels in the next period, although they increased again in the latest years.

The data, still based on the 4 possible replies, are subsequently analysed under different categories based on the public authority to which the request was filed: Ministries, Ministry sub-agencies, and self-government bodies. Local administration and State universities are also considered. Visual representations show the percentage of replies which complied with the 10-day maximum time-limit established by Georgian law (this is the case if the information requested needs processing – otherwise, if it is readily available, the institution is obliged to provide it immediately). Furthermore, the report includes data on the format of the replies: for 2015, 39% of them were sent in e-form. Even though this was the highest recorded percentage of information sent in this format, there is still room for improvement, as the digital format allows the information to be sent much more efficiently if compared to other formats. It should, therefore, be the preferable format.

Finally, the report ends with the instances of administrative (25) and court appeals (6) filed by the IDFI. These consist of powerful tools in the pursuit for more institutional accountability.

Overall, this report is a valuable source on access to information in Georgia, and it also consists of an incentive to comply with the existing law regulating access to information. It highlights the institutions which maintained good levels of accountability, exposing those which showed poor results, hoping to encourage them to improve in the future. IDFI has, in addition, awarded the public institutions which have proved to be most accountable in each period analysed, apart from 2010. Similarly, it has named the institutions which have provided least information for the same periods, thus encouraging good practices and improvement in accountability levels.

The report is released within the framework of the project “opengeorgia.ge ”, which has established a database with statistical data measuring the accountability of public institutions in Georgia.