Analyzing accessibility of Wikipedia projects around the world 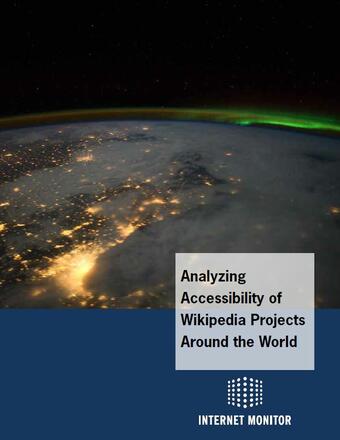 By exploring the cases of filtering Wikipedia, the report also helps to map the kind of content - political, historical, religious, sexual, cultural, drug-related and the like, that lead to censorship in different countries.

All countries monitored have had Wikipedia the target of government censorship. In some cases, single pages have been targeted, while in other single articles prompted the block of the whole site.

Key findings exposed in this study show that there was less censorship in June 2016 than before Wikipedia's transition to HTTPS-only content delivery in June 2015. This communications protocol prevents censors from seeing which page a user is viewing, meaning that they must choose between blocking the entire site and allowing access to all articles. According to the authors, the shift to HTTPS has been a good move in terms of accessibility to Wikipedia: "The option to access Wikipedia using either the HTTP or HTTPS protocol meant that in some countries where individual articles on the HTTP version of the site had been blocked, the entire site was now available through HTTPS", the report reads. However, as the case of China testifies, even if Chinese users were suddenly able to access hundreds of previously blocked articles with the shift to HTTPS protocol, in May 2013 Chinese authorities decided to block the entire HTTPS version of Wikipedia.

As far as Russia and Turkey are concerned, in both countries control and filtering of web content has been growing over the past years. In Russia, several Wikipedia articles in both Russian and English Wikipedia, most related to drugs or suicide, reportedly appeared in the blacklist of blocked sites maintained by the Roskomnadzor, the Russian federal agency which supervises electronic media. In Turkey, the practice is common of blocking entire sites from single pieces of information, as was the case of YouTube, Twitter, Blogger and Wordpress and for other 110,000 unique domains which as of June 2016 were entirely blocked in Turkey.

The study has been conducted using two complementary data collection and analysis strategies: a client-side system centred on users' data and a server-side tool which is based on traffic data coming in to Wikipedia servers. Analysed by an anomaly detection algorithm, both type of data provide information on events that can likely be considered related to censorship in Wikipedia.

By discovering, tracking and systematizing shut-downs of Wikipedia around the world, the authors of the report aim also at shedding light on the broader issue of Internet accessibility around the world.

The study, published in May 2017, elaborates on data collected in the period 2011-2016. Thus, it does not take into consideration the block of Wikipedia in Turkey occurred in April 29, 2017.