As shown by reports submitted to Index on Censorship’s Mapping Media Freedom platform in the first quarter of 2017, media professionals were arrested at an alarming rate, with more than a fourfold increase over the fourth quarter of 2016 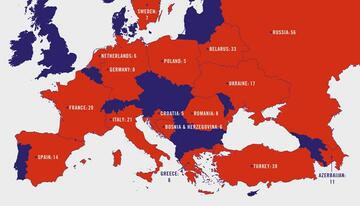 Between 1 January and 31 March 2017, Mapping Media Freedom’s network of correspondents and other journalists submitted to the database a total of 299 violations of press freedom.

The platform—a joint undertaking with the European Federation of Journalists and Reporters Without Borders, partially funded by the European Commission—covers 42 countries, including all EU member states, plus Albania, Belarus, Bosnia Herzeogovina, Iceland, Kosovo, Macedonia, Montenegro, Norway, Russia, Serbia, Turkey, Ukraine, and Azerbaijan. In September 2015, the platform expanded to monitor Russia, Ukraine and Belarus and in February 2016 it included Azerbaijan. Since launching in May 2014, the map has recorded more than 3,200 violations of media freedom, with 1,393 reports documented last year alone.

Throughout the first three months of 2017: one journalist was murdered; 42 incidents of physical assault were confirmed; and there were 89 verified reports of intimidation, which includes psychological abuse, sexual harassment, trolling/cyberbullying and defamation. Media professionals were detained in 69 incidents; 38 criminal charges and civil lawsuits were filed; and journalists were blocked from covering a story in 54 verified incidents.

Overall, Turkey, Russia, Belarus, and Ukraine displayed the most alarming rates of violations of press freedom.