This report highlights the latest developments in the Hungarian media landscape by considering Soft Censorship practices such as state advertising, captured channels, bribery and payments as well as by esaminating regulatory and administrative pressures on the media 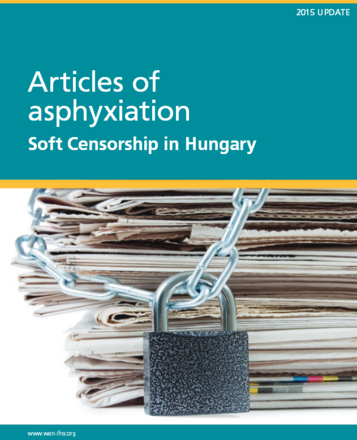 The report, prepared by Méreék Media Monitor, updates the January 2014 report “Capturing them softly: Soft censorship and state capture In the hungarian media” and highlights the latest developments in the Hungarian media landscape. The analysis defines official “soft censorship” or indirect censorship as “the array of official actions intended to influence media output, short of legal or extra-legal bans, direct censorship of specific content, or physical attacks on media outlets or media practitioners”.

The key findings include that mostly government-friendly media profit from recent changes in the state advertising spending. Through a new legal framework on partisan licensing practices, Hungary's radio market has been reshaped and public broadcasting has reverted to state broadcasting that promotes the ruling party. Further, the official intervention in the media agency market, and centralization of government advertising spending are reshaping the media market, even if the concrete consequences are uncertain. Effects on the media of the revision of the progressive advertising tax in May 2015 are examinated and reccomandations regarding the Hungarian state's role in contributing to media freedom are given.