Assessment of media system in Macedonia

The Association of Journalists of Macedonia (AJM) presents different causes of the drastic deterioration of press freedom in the country. Among the elements considered are the abuse of legal proceedings, the connection among media, public money and advertisement, as well as the need for amending the law on audiovisual media services and public broadcasting 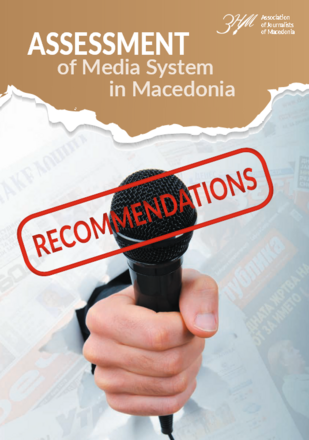 In this comprehensive report, the AJM considers the dramatic deterioration of media freedom in Macedonia, exemplified by the drastic decline in the ratings of the country by the Index of Press Freedom. In four years, Macedonia deteriorated for 83 places in the ranking produced by Reporters without borders in relation to the freedom of the press. In 2009, the country was ranked at the 34th place, while five years later Macedonia dropped to the 117th, ranking after Tajikistan. Macedonia had also a bad rank in the 2015 Index from Freedom House. Within five years, the country has fallen for 10 points, recording the biggest drop compared to all Balkan countries.

The reasons for the dramatic drop in media freedom should be found in the failure of the authorities to provide favorable environment for safe work of journalists and the media. In order to silence independent and critical media, the authorities frequently initiate court proceedings against media owners and journalists. In 2012, the owner of the first independent TV station A1, Velija Ramkovski was sentenced to 13 years in prison on charges of money laundering, and in 2013, the journalist Tomislav Kezharovski was sentenced to four and a half years in prison for allegedly revealing the identity of protected witness. In 2015, the Court of Appeal upheld the conviction and reduced the sentence to two and half years. Except judicial proceedings against media and journalist, a significant role for the fall of media freedom in Macedonia concerns media financing mechanisms and the functioning and supervision of the public broadcaster. The report hence considers the legal framework that regulates these areas, highlighting their limits and providing specific recommendations for improving the situation of press freedom.