Attacks against journalists and media freedom in Europe 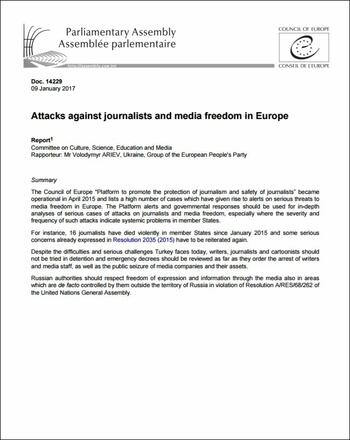 From April 2015 to 28 November 2016, the Council of Europe “Platform  to promote the protection of journalism and safety of journalists ” recorded 230 alerts in 32 member States. 95 of those alerts have received an official reply by the member State concerned and 23 cases have been resolved. In total, 16 journalists were killed in that period within Council of Europe member states.

The report presents the main situations of concern registered through the Platform, highlighting in particular:

Observations are included related to country specific situation, including in particular Azerbaijan, Italy, Hungary, Georgia, Ukraine and the Russian Federation.