Attacks and Harassment. The Impact on Female Journalists and Their Reporting

Journalists and other media workers face a range of digital and physical threats that threaten freedom of expression. Based on the findings of a global survey, this report provides an examination into the professional dangers of being a female journalist today. 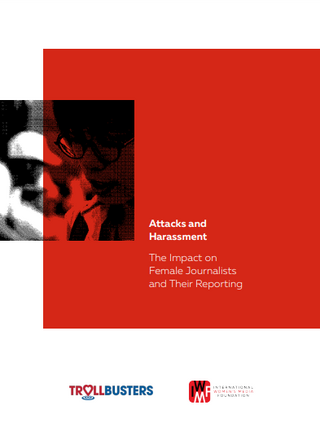 For women journalists, physical, sexual and online abuse is part of their daily work lives. Freelancers are particularly vulnerable after online attacks as they don't have anyone to whom they could report the abuse.

Gender-based attacks online against women journalists often reference body, personal features or personal relationships. Many of the threats women journalists receive on social media are sexist in nature, designed to intimidate or shame the journalist. Moreover, women journalists may have personal images or information disclosed that threatens their physical safety. All these attacks seek to discredit women media workers, damage their reputations, and ultimately silence them. Perpetrators of these physical and online threats operate for the most part with impunity.

Nearly 2 out of 3 respondents to the survey said they’d been threatened or harassed online at least once. Of those, approximately 40 percent said they avoided reporting certain stories as a result of online harassment. Indeed, the report shows that persistent attacks do change journalists' professional behaviours. They may close social media accounts or self-censor the topics or words they use. There are also some journalists who must relocate in exile and leave the profession. Nearly 30 percent of the respondents to the survey indicated the threats and attacks they received made them think about getting out of the profession.

Violence continues to plague journalists around the globe, including murder and assault, online harassment in the form of rape and death threats, and increased surveillance. The online environment increasingly amplifies misogyny, sexism, racism, homophobia, religious and other hate speech. In light of their role as cultural producers and amplifiers, journalists are part of a power struggle over hateful ideologies and violent misogyny.

- Direct harassment: for instance, being called offensive names, being threatened physically, and being stalked.

- Invasion of privacy: refers to harms done to the victim through the unauthorized access to and exposure or spreading of information beyond the owner’s control.

- Denial of access: occurs when someone uses the features of the platform to harm the victim, usually by preventing access to digital tools.

The research concludes that online and offline abuse is often underestimated by media management and authorities. Half of the respondents to the survey reported a recent online incident to management. Of those who did report, one-third said they were not satisfied with the response. Others did not report incidents for fear of professional consequences such as being denied certain stories. Too many media organisations do not have formal policies or protocols in place to protect their employees.