With funding from the EU's Fundamental Rights and Citizenship Programme, a recent report by the PRISM project has empirically investigated online hate speech in France, Italy, Romania, Spain and the UK 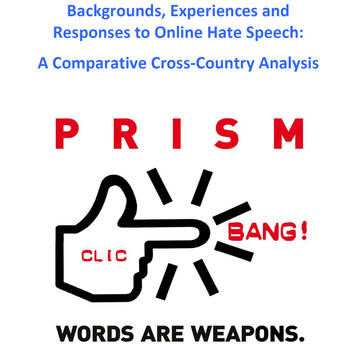 The 2015 PRISM report "Backgrounds, Experiences and Responses to Online Hate Speech: A Comparative Cross-Country Analysis" examines online hate speech, or "cyber-hate", and its impact at the societal level

The basic assumption on which the report is grounded maintains that online behaviour and hate speech have serious repercussions also outside the digital sphere, ultimately leading to hate crimes.

The digital sphere is very often the starting point of a process in which discrimination and hate speech trickle down to several dimensions of social behaviour, feeding a "pyramid of hate" that reaches from the propagation of stereotypes at the bottom to the extreme of genocide at the top.

The more a bottom tier becomes normalised, the report argues, the greater the chance is a higher tier will enter the process of being socially accepted as well. Overt discriminatory speech would possibly lead into more structural discrimination (i.e. exclusion from educational and employment opportunities), which could then lead into individual- or community-based acts of physical violence.

Based on the empirical data collected across 5 European countries (France, Italy, Romania, Spain and the United Kingdom), the PRISM report makes different suggestions for each of the countries under the microscope.

For France, recommendations to tackle hate speech point to the need for social media users to sign a charter committing against online hate speech and actively ignore or delete comments that would fall into that category; for the media to bring "back the far-right into society"; for educational institutions to provide training on how "to use information and technological tools properly"; for social media platforms to filter out cyber-hate; and for institutions to avoid trivializing hate speech.

For Italy, the police recommended that legislators reform laws to "allow third party reporting"; that institutions allocate resources for the police "to effectively monitor and combat hate speech" and get training on the topic; that multiple stakeholders develop "a joint strategy for preventing and fighting hate speech" and encourage more collaboration and networking between police and civil society groups.

Professionals gave most of the recommendations listed for Romania, ranging from a more systemic approach - i.e. the media and politicians should hold national debates to promote and protect free speech regarding human rights, and educators and the government should provide an educational framework focusing on human rights and diversity - to a more targeted exclusion of hate speech, namely legal authorities sanctioning hate speech and media outlets insisting "on quality content and quality interactions with their audiences."

In Spain, police, prosecutors, NGOs and young people all agreed that there should be "public campaigns to raise awareness among the population that online hate speech can and should be reported". Another recommendation by young people in the country was that government institutions and representatives lead others by example by refraining from making hateful or discriminatory remarks on or off social media.

Finally, in the United Kingdom, professionals and young people recommended that organisations working in hate speech prevention "involve young people - as the defender of human dignity" via "Internet awareness and counter speech." They also suggested that policy and lawmakers clearly define what hate speech means and what the boundaries are, and that social media providers as well as users are held responsible for the issue.

Finally, while the report highlights specific needs for each of the scrutinized countries, common legislation at the European level also appears as a necessary measure to provide a broad framework of reference promoting common legislation and judiciary mechanisms to deal with online hate speech.

PRISM - "Preventing, Redressing & Inhibiting Hate Speech in New Media" – is funded from the Fundamental Rights and Citizenship Programme of the European Union to research online hate speech in five EU countries. Members of the University of Barcelona carried out the project, drawing upon international and national-level reports, and empirical evidence from interviews and observations of behaviour on online platforms.