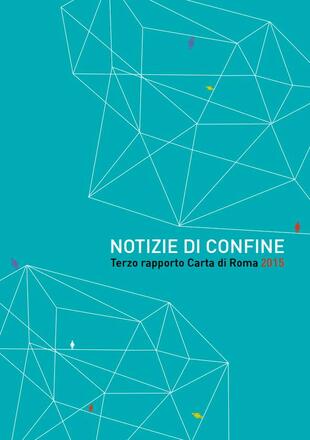 This report by cartadiroma.org analyses the coverage of the refugee crisis by Italian media during the first 10 months of 2015, providing for qualitative and quantitative observations. The analysis takes into account both printed and broadcasting media, assessing how much and in which way they reported about the refugee crisis.

Media offer a privileged observation point to assess the attitude of public opinion in relation to the topic, as through a media analysis it is possible to identify approaches, arguments and values adopted in the reporting of the phenomenon. At the same time, public opinion is very much influenced by the way in which migration flows are dealt with by media: it is hence extremely telling to examine whether and to what extent media adopt stereotyped images contributing to the consolidation of a hostile approach towards diversity.

The year 2015 will be remembered for the dramatic refugee crisis. The theme came to dominate not only the political agenda but also media headlines. The topic occupied the headlines in a stable way all along the year. Indeed, the flow of migrants and asylum seekers towards Europe has become “the topic” of the year. Despite this, as the report highlights, the theme has been often approached by media with a short term perspective, reporting day by day and frequently sliding into the emergency approach.

During the first ten months of 2015, both printed and broadcasting media in Italy registered an unprecedented level of news relating to the refugee crisis, with a peak of 80% more reporting in printed media and a 250% higher frequency in broadcasting compared to the previous year. Together with a higher density of news relating to incoming asylum seekers, significant changes have been also registered with regard to the style and approach of the coverage.

Migration has deeply influenced the media agenda during the last year. Alarmist tones have often prevailed, but at the same time this tendency has been counterbalanced by the initiation of a series of good practices in reporting the migrants' crisis, novelties which can be attributed partly to the dramatic character of the crisis and partly to the capacity of media to react in a professional manner.

The very common association of the terms “migrant” and “criminal” did not disappear, yet it was sometimes replaced by the couple “migrant-terrorist”. Yet, especially in the last months, migrants have been also described as “persons”, a rather new and positive development.

Along with the coverage of arrivals and dramatic conditions faced by asylum seekers in their journey to Europe, the topic most often referred to in the coverage of the crisis by Italian media is the issue of hospitality. This has attracted a considerable part of the attention both because of the difficulties in providing a decent shelter and partly because of the increasing visibility of civil society and civic initiatives in compensating for the insufficient public commitment.

Moreover, reporting about migrants low assumes very often the tones of a border reporting, with a raising visibility given to the position of other countries and of the European Union. Some how, the topic is one that forces media to broaden the horizon of their reporting. Issues such as the construction of the waal in Hungary, the situation of asylum seekers in Calais, and events marking a change in European policy have received considerable attention.

The last chapter of the report identifies good and bad practices adopted by media in reporting the refugee crisis during 2015.

Among the bad practices consolidated during the year, the report notes the persistent identification of migrants with a threat (to security and public order; to the occupational level of nationals; or to culture and religious identity). This is complemented with the practice of de-contextualisation of the events reported in the news and with the provision of approximative information. A particularly worrying habit is the presenting of single interviews to common people as if they were to be considered a reference point. In this way, hate speech and alarmist positions find their way to the broad public, which is happening also when hate speech by politician is given undue space in media.

Among the positive form, there is the habit of providing context to the news, making explicit background information, origins of incoming people, legislative frameworks, etc...as well as the involvement of expert in the making of news. Among the most positive strategies developed by media, the report notes the effort to make migrants' voices heard, a methods which finds space in 7% of prime time of television news on this topic.