Bosnia and Herzegovina: Indicators for the level of media freedom and journalists’ safety

Supported by the European Union, the Association of BH Journalists has produced a report which intends to measure the level of media freedom in the country throughout three main indicators 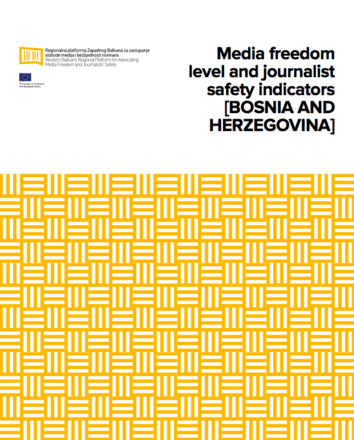 This report presents the findings of the research conducted within the regional project Western Balkan’s Regional Platform for advocating media freedom and journalists’ safety, which was implemented by national journalists’ associations not only in Bosnia and Herzegovina, but also in Kosovo, Macedonia, Montenegro and Serbia with the financial assistance of the European Union.

The main objective of this research is to provide baseline assessments which will be further used in a regional mechanism for monitoring media freedoms at local, national and regional level. Being part of a broader project, this research has been conducted on the basis of a common methodology. According to this approach, the level of media freedom can be measured using three indicators: 1) legal protection of media and journalists’ freedoms; 2) Journalists’ position in the newsrooms, professional ethics and level of censorship; 3) Journalists’ safety. Moreover, the report includes a list of recommendations for Bosnian authorities.

As the report explains, on one hand the legislation of Bosnia and Herzegovina guarantees a high level of human rights and freedoms, including the right to freedom of expression. On the other hand, although media laws stipulate the obligation to respect and encourage pluralism of political ideas, the situation is different in practice. The division of BiH society and strong political influence on the media largely prevent pluralism in the media: all media in the country, regardless of whether they are private or public, are influenced by some political party. In Bosnia and Herzegovina there is no journalists’ union and a large number of journalists work without an appropriate employment contract. According to statistics, Bosnian journalists face various forms of assaults, but the State does not recognise journalists as a separate category that requires protection.

This report is available in Bosnian  as well. The comparative analysis of the five countries involved in the project is available at this link.