Briefing: Media Freedom Violations in the EU under COVID-19 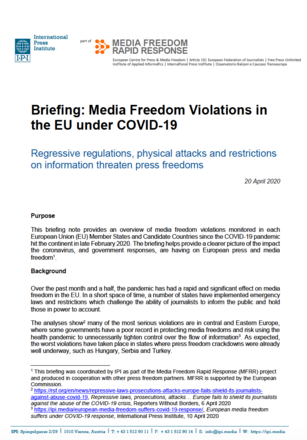 Since the beginning of the COVID-19 health crisis, many EU Member States and Candidate countries have implemented emergency laws and restrictions. However, some of those measures have inevitably affected also press freedom and tightened control over the flow of information.

IPI highlighted many cases of:

Some of those measures raise concern also because they are at risk of being extended long after the end of the health crisis.

The worst violations took place in Hungary, Serbia, and Turkey, where media freedom was already under attack. Nevertheless, violations have been recorded in many other countries, such as Bulgaria, Romania, Italy, Slovenia, Spain, Croatia, Germany, Albania, and Bosnia and Herzegovina.