Part of the ‘Building Trust in Journalism in CEE’ project, this report provides an overview of the challenges and opportunities that media are facing in Bulgaria 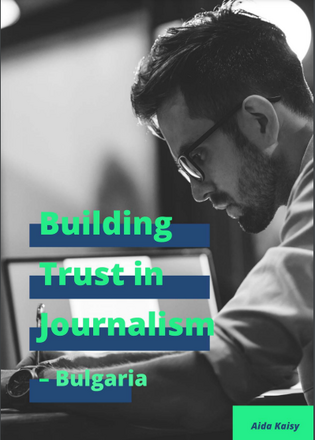 The Bulgarian media landscape is divided based on the attitude towards the main objectives and principles of journalism. Job security is extremely low and self-censorship is often practised as a means of avoiding harassment and intimidation. Smear campaigns against independent media platforms and journalists are commonplace. Ethical journalism principles such as accuracy, accountability and impartiality are under threat.

Freedom of press and professional journalistic practice are under severe threat, and these circumstances are creating an environment where the reputation of journalism continues to suffer and worsen.

The findings of this report, based on a number of interviews that took place with key Bulgarian media stakeholders, are in line with Reporters Without Borders Press Freedom Index, which places Bulgaria at the lowest ranking in Europe.

Independent media is in danger of being eliminated as independent financial investment and trust in the media are at all-time lows. There are few initiatives to educate the public on issues such as media ownership, financing or literacy. Disinformation and a lack of accuracy are further perpetuating this lack of trust. Hate speech and discrimination against minority groups and NGOs prevail in some of the private media and there is little recrimination from the public or the government. Fact-checking is often missed out of the editorial and publication process in many Bulgarian newsrooms.