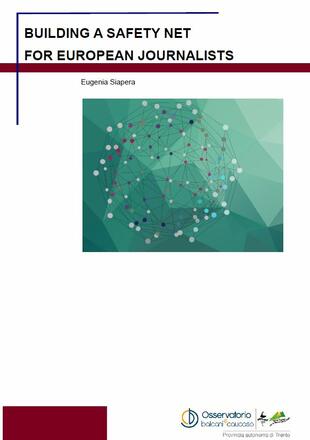 Based on a series of in-depth interviews with broadcast, print and online journalists, including freelancers, those working in the private sector and in the public service media; small media owners/publishers, editors and union representatives, the report strove to achieve a fair representation of different challenges experienced in the journalistic profession. The investigation covered the countries of South East Europe, plus Italy and Turkey. The objective of this report is to identify the needs of journalists and to suggest possible remedial measures.

Part I presents a brief summary of the media landscape of each of the countries involved.

Part II focuses on the problems and threats from the perspective of the journalists themselves. It reports and analyses the kinds of threats encountered, the sources of the threats and the structural parameters surrounding them. In short, the report found that journalists are subjected to a number of threats, some of them direct, for example, through beatings and detentions, but most of them indirect. Some of the problems are already known: the vulnerability of journalists to political pressures; threats from criminal organisations; and the creation of media oligopolies. However, an increasingly negative trend is represented by the new class of media owners, who form alliances with politicians, using the media as political and business leverage. This ‘non-native’ class of media owners is oblivious to journalistic ethics and exerts direct influence upon editorial lines.

Part III focuses on safety needs as articulated by journalists, distinguished into immediate, pressing needs and longer term needs. The first class includes the need for physical safety and the management of the threat, psychological support and solidarity, legal help. In the second group are listed needs such as measures addressing the environment within which journalists and other media professionals operate. These include legal and regulatory adjustments, a renewal of the code of ethics, educating the public on the importance of journalism, and addressing journalists' working conditions. Finally, the report notes, in order to improve the situation of journalists in these countries, stronger alliances shall be established with the public and the society that journalism is ultimately serving.