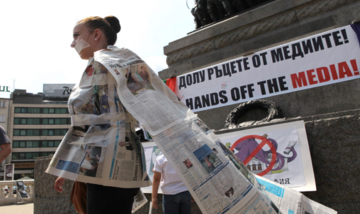 The 2017 issue of IREX Media Sustainability Index (MSI) for Bulgaria “marks the lowest level recorded since the survey launched in 2001”, as underlined by the curator Petko Georgiev. Among the five objectives assessed, i.e.:

The business management receives the lowest score, as none of the four media groups in the country are truly independent. Large public broadcasters (BNT and BNR) highly relies on state subsidies - and it is widely believed that are under pressure to provide favorable coverage of the government; profits of foreign-owned Nova Broadcasting Group and bTV Media Group are declining and “investors are thinking about leaving”; supposedly independent Economedia Group, supported by mixed donors such as the America for Bulgaria Foundation, is often target of investigations for criticizing the government. Finally, the so-called "truncheons" media (tabloid newspapers, online news sites, and television channels) are used by local oligarchs to exert influence.

Such circumstances deeply affect professional journalism, as a large and diverse media scene provides a narrow range of viewpoints: widespread self-censorship is identified as the major issue. Bulgaria has an established legal environment that protects and promote free speech and access to public information, but it definitely needs to be enforced.