The Media Freedom White Paper is a project of the Union of Publishers in Bulgaria (UPB). The report presents the situation of the Bulgarian Media, providing reasons for the steady deterioration of its pluralism and freedom in the last 10 years. 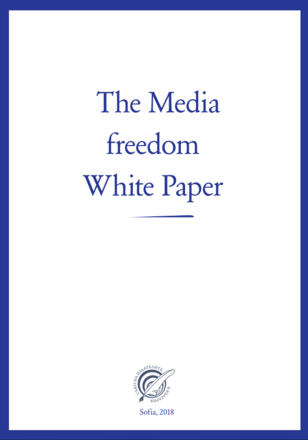 Setting international rankings on freedom of media (such as the measurements published by Reporter Without Borders and Freedom House ) as a starting point, this report by UPB presents a number of reasons that contributed to the dramatic deterioration of media freedom and pluralism in Bulgaria. These reasons can be summarized as follows:

The report underlines the pressures (including defamatory campaigns; investigations; lawsuits and claims of tax evasion) faced by both national and regional media that is critical toward Peevski. One of these media outlets was also penalised by the refusal of the major distributors (under Peevski’s control) to sell it.

Finally the report also underlines the lack of transparency on the way Bulgarian government directs European funds to certain media, recommending the European Commission to launch an international investigation of concentration and unfair competition on the Bulgarian media market.