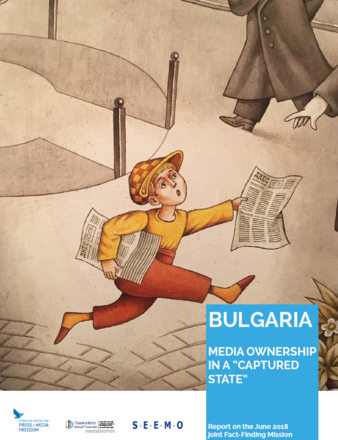 Bulgaria has built up a highly concerning record of media freedom violations, failing to meet the EU standards regarding the European Charter on Freedom of the Press.

The main challenges for media freedom in Bulgaria are media ownership concentration and a general lack of transparency.

Most media outlets in Bulgaria are in the hands of few oligarchs, including some foreign ones, that also control other businesses or are involved in politics. Also advertisers can indirectly exercise political pressure through the control over the editorial content and its distribution.

Currently, there are no clear and effective rules on state advertising, and there is the tendency to use it as a tool to reward companies’ friendliness towards the government and to shut down independent media.

In order to assess media ownership concentration and guarantee a higher level of transparency, suitable measures should be developed. A law on media ownership transparency was adopted in November 2018, but some aspects are still problematic and its implementation requires careful monitoring. In addition, there should be more control over the allocation of EU funds by the government, and other sources of financing (such as membership or crowdfunding business models) should be encouraged too.

Freedom of speech and media freedom are guaranteed by the law and the constitution. However, the legal framework is not sufficiently implemented and there is a lack of provisions for competition in the media sector. Self-regulatory mechanisms should be implemented through the Ethical Code of Journalists, but in practice there are two competing ethical codes for Bulgarian media, and none of them is regarded as particularly effective.

Another critical aspect of media freedom in Bulgaria is widespread corruption: fines and legal proceedings are often used to silence dissent and threaten independent journalists, who are sometimes also targeted by smear campaigns. Many journalists fear losing their jobs, and self-censorship has become necessary for economic survival.

There is also the common feeling of a general lack of rule of law as well as functioning institutions. In particular, the lack of judicial independence threatens journalists and fosters impunity.

Therefore, effective reforms and anti-corruption measures should be implemented, and media literacy initiatives should be increased as well, to rebuild trust around media and journalism.