An analysis of media capture by state-powers and its impact on media freedom in Bosnia and Herzegovina, Montenegro, and Serbia 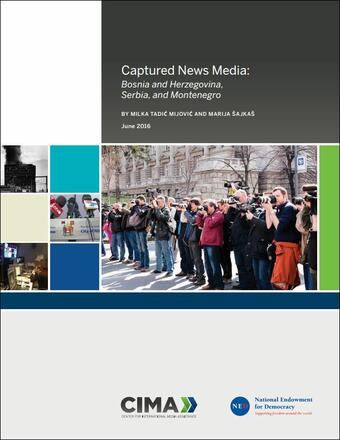 Why are independent media that contribute to democracy and economic progress failing to take root or survive in many countries? This report by the Center for International Media Assistance suggest that one piece of the answer may be found in the concept of "media capture".

Media capture is a systemic governance problem where political leaders and media owners work together in a symbiotic but mutually corrupting relationship: media owners provide supportive news coverage to political leaders in exchange for favorable government treatment of their businesses and political interests. As pointed out in the report, "Political and business elites in the countries that are the subject of this report have acquired control over a large number of public and private media, mostly through non-transparent privatization, advertising and/or budgetary support to loyal media. Consequently, media freedoms and freedom of expression in these countries are seriously impaired, as evidenced by the declining trend in the indexes of media sustainability and press freedom."

The study examines media evolution in the Balkans, providing case studies about the media landscapes of Bosnia Herzegovina, Serbia and Montenegro, and pointing to some of the factors that may help creating a sustainable environment for independent media.

The impact of fundings from different donors is also taken into account: as stated in the report, "massive international investment in media development in the Balkans in the 10 years after the wars resulted in improved professional standards, a less restricted flow of information, and increased respect for human rights." Yet, "following the withdrawal of Western donors, some of the media known for professional reporting in the public interest are now under the direct control of ruling elites and large businesses."