The research commissioned by the Center for International Media Assistance (CIMA) is a case study of the media capture phenomenon in Turkey. It gives a historical overview of how the phenomenon has unfolded, which strategies political elites have employed to capture the media, and the overall results and effects on society 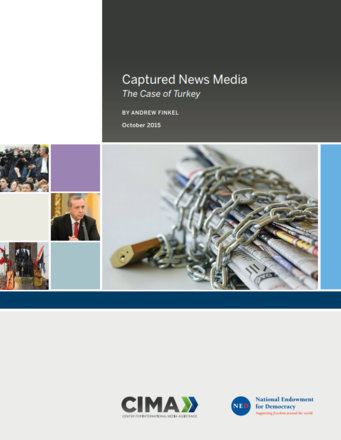 Andrew Finkel, a British journalist who has been based in Turkey since 1989, investigates the media capture process in Turkey. Finkel defines the phenomenon as corruptive relationship between political leaders and media owners. Namely, media owners provide supportive news coverage to political leaders in exchange for favourable government treatment of their business in the form of regulatory changes, legislative measures, or lucrative government contracts.

Giving a historical overview of the country’s troubled recent history, the three martial law periods (1960-61, 1971–73, and 1980–83) and the following economic crisis, the author concludes that in this period Turkey constantly alternated between populist democracy and openly authoritarian rule, thus creating fertile ground for the media capture phenomenon to evolve. Collusion and accommodation between media and state have especially deepened under President Erdoğan’s conservative Justice and Development Party (AKP).

As the author noted, one of the majority shareholders of daily Sabah and ATV television confessed the sins of his industry in a 2010 interview. Namely, “each media group had its own bank and when you have a bank… you lose your freedom. This is what happened and marked the end of journalism in Turkey”.

In the case of critical media, another scenario was implemented. If a friendly business could not buy them, then orchestrated commercial pressure followed. Namely, advertisers were under constant political pressure to move elsewhere, which resulted in bankruptcy.

Such control has a devastating side effect. The author calls it a “Mida's touch” syndrome. The government’s desire for control is ultimately so successful that it ends up destroying the value of media on which it relies. A partisan outlet is of limited use when its audience reads too well between the lines.

Consequently, media capture is one of the key factors of why so many countries fail to create independent media that contribute to democracy and economic progress.