Caught in the Wheels of Power: the political, legal and economic constraints on independent media and freedom of the press in Turkey

Media freedom and independence in the history of the Republic of Turkey. Analysing the media market, practices and regulations with a particular focus on the political and ideological factors that lie behind a repressive media environment 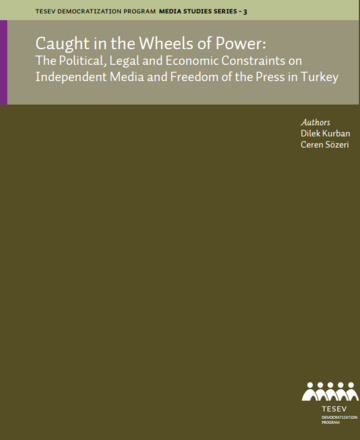 The report situates media freedom and independence in Turkey within a historical context and offers a critical analysis of the state-media relations, focusing on the role played by political actors, regulatory agencies, media owners, courts and journalists in the infringement of journalistic freedom in Turkey.

The assumption this analysis stems from is that a mere review of the regulatory framework is not enough to understand media independence and freedom of the press. Thus, the report aims to individuate which political and ideological factors lie behind anti-democratic and repressive laws, with an historical point of view.

The first part of this study explains the actors and processes of media policy making in Turkey; part two highlights the significant role of big corporations in shaping structural regulation and competition; in part three, the structure of the media market and the conducts of big players are examined; part four discusses the ‘mentality’ that shapes content regulation; in part five, the working conditions of journalists, journalistic standards and practices are reviewed; finally, part six looks at media literacy in Turkey and discusses the opportunities created by campaigns of advocacy groups.

This report is the third of a series of publications that TESEV (Turkish Economic and Social Studies Foundation) has released within its Media and Democracy research area.