A study about legislation and case law after the adoption of a new Civil Code in 2014 which introduced restitution (financial compensation) instead of non-pecuniary damages. How these changes affect journalists and freedom of expression in a system where legislative texts are very succinctly worded 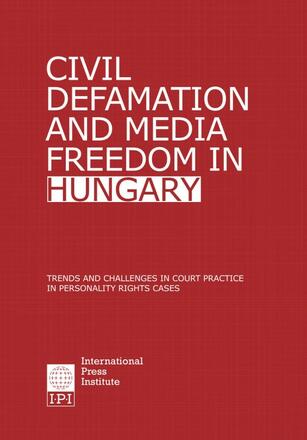 Thanks to the reform of 2014, in cases where personality rights have been violated, claimants can request monetary compensation without having to prove that the violation caused damage.

In Hungary there is a general legislative protection of personality rights with some specific rights (i.e. bodily integrity or health, defamation, the right to a name, protection of privacy and personal data) and one of the new elements of the reform is the right of communities (national, ethnic, racial, or religious groups) to enforce claims.

The focus of the study between legislation and case law

The rules regarding defamation and the right to reputation are the most important with regards to press freedom and according to the analysis “it is both the task and the challenge of the courts to draw the line between facts and opinions, and to set the limit for the reasonable expression of opinion”.

The review of cases

After examining a dozen law cases grouped according to the type of violation (injury to the reputation of politicians and public office holders, politicians and the right to privacy, violation of the right to reputation and privacy of other public figures and celebrities, protection of the reputation of non-public figures such as private individuals, right to one’s facial likeness and voice recording, journalists and faces of police officers), the study does not draw any specific conclusion.

There is simply the statement that the “current situation in terms of limitations on freedom of expression” is to be criticised. Another critical issue is “the recent increase in Hungary of cases in which politicians turn to the courts to seek relief for injuries they allege to have suffered”, with the aim of putting an end to political controversies. In this context, “the media get caught in the crossfire” and become targets of legal actions.