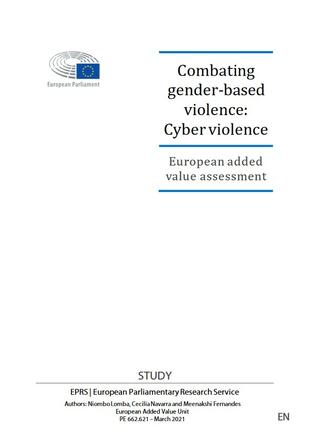 According to this study, gender-based cyber violence is a phenomenon that was inconceivable 30 years ago. More and more women and girls are experiencing harassment, stalking and other kinds of threats while online. With the ever-growing use of social media, the threats women and girls experience online have an effect on how they use the internet.

There is currently no common definition or effective policy approach to combating gender-based cyber violence at EU or national level. Action taken so far has been inadequate, and the cross-border nature of gender- based cyber violence has yet to be properly addressed either.

This European added value assessment (EAVA) is intended to underpin the European Parliament's right to request legislative action by the Commission.

Sweden had the highest prevalence of cyber-harassment as well as one of the highest rates of internet access. In 2017, a Swedish study highlighted that 7 out of 10 women in the media, from editors to journalists, had experienced threats or harassment online.

A survey conducted by Amnesty International and Ipsos Mori found that 30% of women respondents reported having experienced abuse or harassment online at least once.

The report further cites a survey by Alpha Research which indicated that women in Bulgaria are embarrassed to talk about these forms of violence. The survey also demonstrates that Bulgarian women have a narrower conception of what constitutes sexual violence than in Sweden.
Cyber stalking, if persistent, can enter the offline world. Online stalking can intersect with other abusive behaviors, “such as defamation, identity theft, domestic and intimate partner violence and workplace harassment.
The intended targets of these violent acts are not the only victims. Since the Web is not a self- contained community, the proliferation of abusive information can implicate other actors in a snowball effect. Journalists reporting the incidents are an example of secondary actors who may become victims of gender-based cyber violence themselves.
A study conducted in Sweden found that seven out of ten women who write editorials or articles had been threatened or harassed online, with half of those reporting that they felt fear or anxiety after receiving threats. The study pointed towards the threat this activity poses to women’s rights to freedom of expression and their ability to engage in public discourse in society. This is further underlined by the fact that around two out of five of these women journalists refrained from researching or reporting on particular subject matters, groups, people or organizations after receiving threats for having done so.
Another study in Sweden indicated that the topics that tend to provoke most harassment are those related to integration and refugee policy and gender equality
Existing research indicates that victims of gender-based cyber violence frequently do not receive adequate support. The impact of cyber violence on victims includes reputational damage, mental illness, disruptions to living situations, invasions of privacy, silencing or withdrawal from the online environment, and damage to personal relationships as a by-product of being active online and reduced engagement in democratic life.
In conclusion, gender-based cyber violence is associated with a wide range of costs, only some of which can be monetized.
The most important drivers of costs are the mental health consequences of cyber violence, which lead to productivity and income losses, quality of life losses and healthcare costs.