Common sense wanted. Resilience to “post-truth” and its predictors in the new Media Literacy Index 2018

The Media Literacy Index 2018 shows that there is a clearly geographic pattern in the potential of resilience to post-truth phenomenon: the countries with a better performance are in the North and Northwest of Europe, as opposed to the countries in the Southeastern Europe. Countries like Hungary, Italy and Greece are in a middle cluster 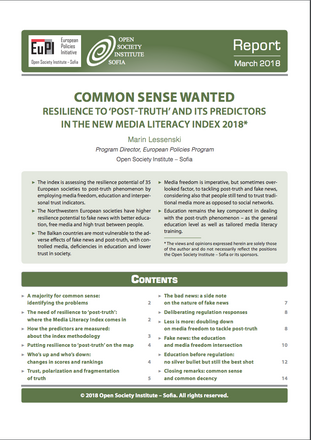 The European Federation of Journalists contributed to this digest

The spread of the so-called “fake news” and associated phenomenon labeled under the expression “post-truth" bring about real-world consequences, such as distrust in institutions and expert knowledge, rising polarization in society, hate speech and crime in the extreme cases. The Media Literacy Index was created in 2017 as a response to such phenomena. It aims at  measuring them and assess their consequence in a number of European countries. The report is a product of the European Policies Initiative (EuPI) of the Open Society Institute - Sofia .

The Index ranks the European countries according to their potential to withstand the ‘post-truth’ and its negative consequence, with the main assumption that indicators for media freedom, quality of education, interpersonal trust and e-participation can serve as predictors to the level of resilience of a society to fake news, post-truth and related phenomenon. The index combines four main indicators, attached varying weight, in Media Freedom, Education, Trust and New forms of participation to calculate and rank the countries.

This is the second edition of the Media Literacy Index which scores and ranks 35 countries in Europe. The main assumption is that indicators for media freedom, quality and level of education, interpersonal trust, trust in society and the use of e-participation tools by citizens can serve as predictors to the level of resilience of a society to post-truth related phenomenon. The Index refers to media literacy to gauge the potential for resilience to the negative effects of diminishing public trust, polarization in politics and society, and media fragmentation.

According to the data gathered by the Index, the best equipped countries to resist post-truth and its ramifications are the Northwestern European countries, i.e. Scandinavian ones, the Netherlands as well as Estonia and Ireland. On the other side, the lowest scoring countries are in Southeast Europe. Scores are associated to indicators concerning media freedom, education and trust. The countries at the bottom of the ranking have low education scores, more controlled media, and low trust among people.

The Index also serves the objective of offering useful instruments to find solutions to the consequences of post-truth in European societies. In this sense, the report highlights that education and media literacy are key to build resilience to the post-truth phenomena and to reduce polarization while enhancing trust in society and in the media.