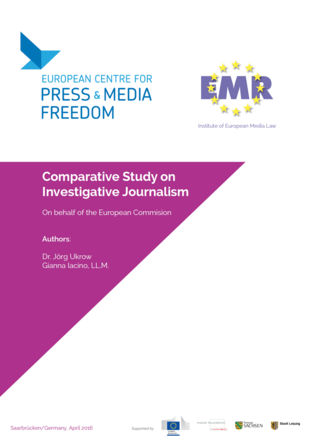 The report describes and analyses media freedom on the European as well as on the national level, focusing in particular on aspects which are relevant for investigative journalism, such as state and trade secrets, surveillance and secret recording, protection of sources.

Measures protecting investigative journalism are considered, taking into account the human rights protection system as well as constitutional guarantees provided in each country.

On the basis of this extensive analysis, the need for improvement is identified and best practices for a better protection of press and media freedom are being provided.

The major share of the data used for the comparative analysis has been obtained from country reports by national experts selected from the EMR media network. They are attached to the study and contain both the description of the relevant legislation and in-depth descriptions of practical cases with regard to the press and journalistic sector.

Detailed country reports are provided for the 28 EU members states, plus Turkey and Macedonia.