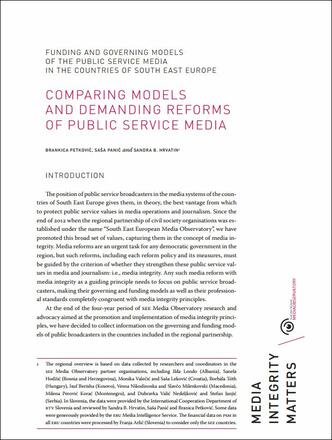 “The situation of public service media displays every major problem of the media sector in the region. The grip of the partial political interests in which these institutions find themselves is so strong that their operations constitute a kind of barometer for the state of media freedom.”

The position of public service broadcasters in the media systems of the countries of South East Europe gives them, in theory, the best vantage from which to protect public service values in media operations and journalism, guaranteeing what the “South East European Media Observatory” has designed with the notion of media integrity. Yet current developments in Serbia, Montenegro and Croatia indicate clearly just how vulnerable public service media are to political pressure, and how indispensable public support is to their endeavours, but the other countries in the region are not immune from similar risks.

This report by South East Europe Media Observatory offers a comparative overview of the functioning and financing of PMS in SEE, based on data provided by the European Broadcasting Union (EBU), an association of public service media in Europe. No data on Kosovo are available, since the public service media organisation in Kosovo has not been yet accepted into the EBU.

Across South East Europe, media which are currently defined as public public service media (PSM) underwent a transition from state-run to public-service in the last decade. In most of the cases, this transition failed to genuinely connect PSM with the public, offering some room for far reaching misunderstandings of the role of public service media. The formerly state-run media outlets, albeit transformed at the formal level into public service media, were quickly taken over by political elites. This gave rise to a specific form of party domination within media, where the governing, managing and editorial positions were reserved for personnel loyal to those in power.

The report highlights different challenges faced by PSM. First of all it highlights how the “institutional mechanisms aimed at ensuring public service media independence reveals a plethora of inventive ways to curb the influence of the public, and to enable political incursions into management structures whenever a change in government occurs”.

When it comes to financial sustainability, PMS have been hit by the emerging commercial media market and inherited organisational dysfunctions. Moreover, the methods of media funding are often exploited as a matter of political campaigning: instead of making media more dependent on the public through systematic support for efficient licence fee collection, some countries are opting to fund public service media from state budgets.

What is to be done?

Media reforms are an urgent task for any democratic government in the region and should aims to promote, especially for public service broadcasters, more functional governing and funding models as well as the conditions for professional standards to be fully congruent with media integrity principles.

It is up to the state to ensure the institutional autonomy of public service media through the legal framework, most importantly in terms of their governing and financing. Public service media are the last path of mass communication left to the public. The privatisation of that path by any partial interest (be it political, economic, or rooted in the particular interests of civil society segments) is unacceptable. The communal enactment of the people’s communication rights must be made central to the public debate. Therefore, the efficient operation of public service media must be continuously developed and maintained, as must the mechanisms that inscribe media integrity into their very foundations. The public interest, on which most countries base their media policy legislation, must ceaselessly translate to a direct dialogue between public media and the public. To paraphrase John Stuart Mill, a state is only worth as much as the public service media operating in it. A state which dwarfs its public service media, in order that they may be more docile instruments in its hands, “will find that with small men no great thing can really be accomplished”.