Concentration of Media Ownership in Ireland

A new study on Irish media pluralism (commissioned by MEP Lynn Boylan), presented at the ECPMF Conference 2016, stresses that Ireland has one of the most concentrated media markets in Europe. 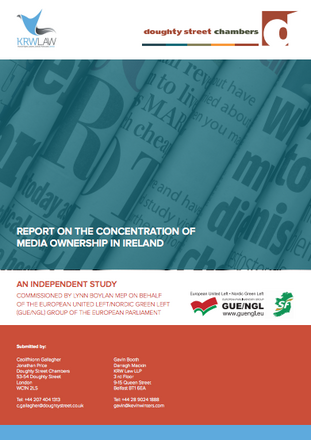 According to the study, carried out by the legal firms Doughty Street Chambers and KRW Law LLP, the two most important controlling entities in the Irish media landscape are the national State broadcaster, RTÉ, and an individual businessman, Denis O’Brien, who has a dominant position within the Irish media sector. In addition to his media ownership, Mr. O’Brien is also a prolific businessman and one of Ireland’s richest persons.

The report reflects the findings of Dr. Roderick Flynn who conducted the Irish media pluralism study for the Centre for Media Pluralism and Media Freedom (CMPF) based in Florence.

The authors of the report, Caoilfhionn Gallagher, Jonathan Price, Gavin Booth and Darragh Mackin echo the concerns in the CMPF report regarding the concentration of media ownership in the Irish market. In addition they also stress that those concerns are amplified by a number of additional features, including a large number of sets of proceeding initiated by Mr O’Brien which results in a chilling effect on news gathering and reporting in the public interest and Ireland’s defamation laws which are associated with high jury awards and a lack of certainty regarding damages which means that many newspapers simply do not take the risk of publishing.

These factors create a “perfect storm” which threatens news plurality and undermines the media’s ability to perform its watchdog function.

In more detail, the report concentrated on the European legislation and Irish constitutional law in terms of competition regulation and property rights which are related to possible solutions to the current situation. In particular, the authors of the report state that it could be possible to take retroactive steps which would alter current media ownership concentration and property rights should be regarded as a flawed legal barrier for the change since, according to Irish constitutional law, property rights should be balanced with social justice and the protection of the common good.

The report is concluded with the recommendation of urgent action by Irish authorities, namely, the establishment of a cross-disciplinary Commission of Inquiry. This Commission should examine the issues closely and make concrete recommendations, within a tight timeframe.