Confronting the Crisis in Independent Media

Given the undeniable decline of independent journalism and the lack of understanding by international donors about how to help, this report sketches guidelines on how to confront the crisis on a coordinated global scale 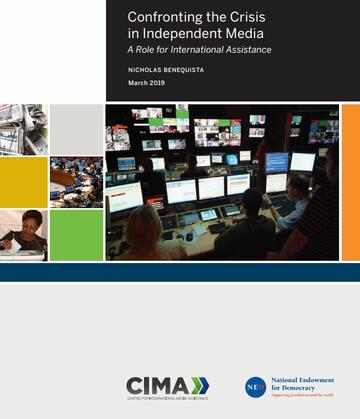 The decline of independent media has been going on for over a decade, but a strong response has not yet been formulated. The reasons behind the lack of a coherent response are twofold: difficulty in understanding the driving forces behind the crisis and the intertwining of the crisis with other global issues. This report was prepared for the 2019 meeting “Confronting the Crisis in Independent Media”, where the international community – representatives of foreign ministries, official and private donors and major media development organizations - discussed how to help the sector.

The research conducted by CIMA aimed to identify pathways for donors to strengthen the media's public service function – i.e. their role as a sentinel, a watchdog, an infomediary, and a public platform. The existing opportunities to promote coordination across donors are called by the report “entry points”, as they conduct to two pathways.

Coalitions work to promote enabling environments and sustainable sources of journalism and to uphold the principles of an open and accessible Internet. However, media sector coalitions remain uneven especially in developing countries, where they are not capable of engaging with national policy-making processes and connecting the international, national, and regional efforts. The report then focuses on these three levels of coalitions. The development of national coalitions needs a wide base and a multidisciplinary approach, and these coalitions can make a significant contribution with modest support to strengthen the media sector. Regional networks are crucial intermediaries between the national and the global and they can also lead national reform efforts. International coalitions can provide opportunities, incentives, and knowledge needed to activate or strengthen national and regional action; they tackle urgent issues such as Internet shutdowns, site blocking, disinformation, media ownership, and regulatory controls.

Media support by governance has been rather limited, but a number of opportunities exists to integrate it into its agenda. These opportunities are provided by national governance agendas and international development frameworks (for example the Sustainable Development Goals and the SDG 16 in particular) and they are enhanced by global efforts currently led by the World Bank, OECD, UNDP, and the Open Government Partnership. Possible actions that can be taken include:

- integrating media development into support for open government and transparency: for instance, senior World Bank officials suggested that if national partners are able to put media issues higher in national development agendas, more opportunities could be created to support the sector;

- more effective responses to government demand for institutional reforms in the media sector: the OSCE, UNDP, World Bank, and OECD are among the players that could help coordinate support to strengthen government communication, open the media sector, and reform state broadcasters;

- challenging environments: media support must find strategies to work even in countries where neither civic space nor internal champions can be found;

- support for media development in closed and illiberal states: the risks are higher, but indirect funding opportunities directed toward private foundations, civil society coalitions, and regional mechanisms do exist – support for legal defense, virtual and physical security measures, and the hosting of secure servers and communication platforms;

Finally, the report stresses that research and the subsequent discussion in Paris produced a number of recommendations for actionable steps. These recommendations underpin three strategic objectives:

- building the high-level will and donor capacity needed to increase support to the media sector:
a. garner multi-country, high-level support for this agenda
b. explore a global fund for media development and international media
c. invest in internal and shared expertise, including for country-level donor representatives who often need guidance on media reform topics

- enhance the effectiveness of media sector support by making it more demand-driven and coordinated:
a. develop models for the integration of media development into national governance and development agendas
b. bolster coordination opportunities for donors, their development partners, and media stakeholders at the national level
c. improve data on international media assistance
d. leverage the SDGs to coordinate support for the media sector
e. establish coordination groups for support to media in illiberal states
f. integrate media into diagnostics and long-term objectives in fragile contexts