A timely analysis by the UK Media Reform Coalition highlights the consequences of a potential incorporation of Sky Plc. into 21st Century Fox and the implications this would have on the news plurality landscape in the United Kingdom 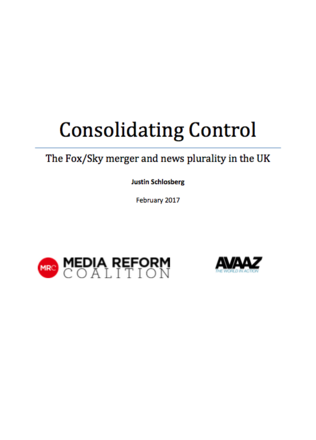 Responding to concerns raised by voices inside and outside the UK Parliament, this data-based analysis examines the effects a merger of Sky Plc. with 21st Century Fox would have on news plurality in the United Kingdom.

The December 2016 announcement that Rupert Murdoch’s media conglomerate was hoping to buy Sky plc. came after a first attempt to buy out Sky Plc. in 2010.

The report, written by Justin Schlosberg, uses mainly data from Ofcom, the UK’s media regulator, with additional self-aggregated data. Visualizing the market shares and reach of the main players in the UK’s news sector, the author makes it easy for the reader to grasp the impact of a potential merger of the two media outlets.

The author looks individually at different media sectors, in separate chapters of the report: Television, Radio, Print, Online and Cross Platform. He uses his findings to make a clear argument as to why news plurality is threatened by the announced plans to integrate the two media companies.

Rupert Murdoch and others argue that since consumers tend to multi-source their information in the digital age anyway, integrating two media companies into one does not make that much of a difference to diversity. Data shown in the report proves this to be false. In recent years, there has been rather a trend towards consuming news from fewer outlets than more.

The article states that the incorporation of Sky Plc. “… will result in the merged entity being the only news and media provider present on all four media platforms at the wholesale level, with a significant presence across them. In particular, the merged entity will effectively become