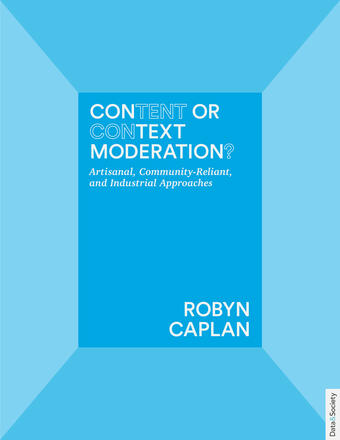 The author interviewed representatives of 10 major platforms (websites and services that host user content and social interactions, but do not produce much content themselves, and moderate content and activities). Platforms are increasingly being called upon to make ethical decisions regarding content. Most of them, however, keep their content moderation policy hidden.

Platforms may be differentiated based on

The author distinguishes three approaches. The artisanal approach is used for example by Vimeo, Medium, and Discord, and was used in the early days of Facebook and Google. There is no automated decision, decisions are taken case-by-case. Rules sometimes are informal. There are small teams of in-house moderators, normally between 5 and 200.

Larger companies like Facebook and Google (which owns YouTube) use an industrial approach, with the goal of creating a “decision factory”. They have more resources and more personnel, e.g. Facebook should have a moderation team of 20,000 by the end of 2018. Policy development and enforcement are separated. YouTube also separates people based on language fluency and expertise. Often companies start with an artisanal approach, then grow, formalise rules and become industrial. Automated tools are increasingly used to flag and even remove content.

The quantity of content is enormous. There is an inherent tension between having consistent rules for content and being sensitive to localised contexts. Global rules can have a negative impact on marginalised groups. The necessity to regulate can be used as an excuse for censorship.

In Germany the NetzDG extended hate speech rules from traditional media to profit-making social media sites and platforms offering journalistic or editorial content with over two million registered users that receive more than 100 complaints per year about unlawful content.

The law in the United States distinguishes platforms and publishers. Platforms retain immunity for non-illegal and non-copyrighted content and are allowed to voluntarily “restrict access to or availability of material that the provider or user considers to be obscene, lewd, lascivious, filthy, excessively violent, harassing, or otherwise objectionable, whether or not such material is constitutionally protected”. It has been claimed that this gave a competitive advantage to the US internet company, but it has also been criticised as too broad of a liability shield. Representatives of some platforms said that the lack of clear guidelines is limiting. Other rules, such as the DMCA for copyright, are clearer, but while big companies can automate takedowns, others must perform them manually.