Council of Europe Commissioner for Human Rights' report on Croatia

Publication Date: October 2016
Publisher: Council of Europe
Link: Report by Nils Muižnieks, Commissioner for Human Rights of the Council of Europe following his visit to Croatia from 25 to 29 April 2016 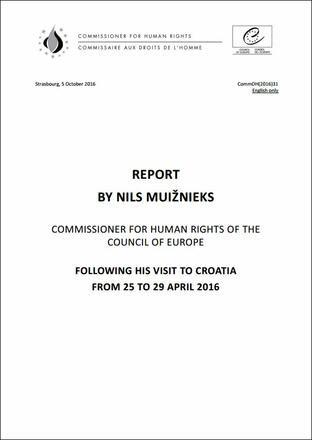 Commissioner Muižnieks visited Croatia from 25 to 29 April 2016. His visit focused on specific thematic issues, in particular: transitional justice and social cohesion; human rights of immigrants, asylum seekers and refugees and freedom of the media.

A summary of the content of the report is presented in the infographic which can be accessed here.

As far as the Croatian media environment is concerned, the Commissioner concerns can be resumed in the following points:

Conclusion and recommendations concerning regulation and implementation of measures in support of media freedom and pluralism are presented in the report (pp.31-32)

The response by Croatian authorities to the remarks formulated by Council of Europe Commissioner for Human rights can be accessed here .