The Council of Europe has issued guidelines to its 47 member states in order to promote media pluralism, transparency of media ownership and media literacy 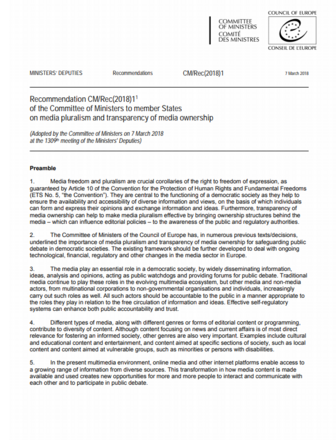 In a Recommendation, adopted on 7 March 2018, the Committee of Ministers endorses a comprehensive framework of guidelines for creating a pluralist, transparent and participatory media environment, both offline and online.

States are encouraged to develop strategies for increasing the sustainability of a variety of media ranging from public service media, local, minority, community and cross-border media.

States are also encouraged to support quality independent and investigative journalism, whilst fully respecting the editorial and operational autonomy of the media. The recommendation provides guidelines which are to assure visibility of diverse content across a number of platforms and help expose it to the widest possible audience through media literacy programmes.

The adopted guidelines call on states to support concrete measures for the media and media pluralism: