Female journalists and bloggers throughout the globe are disproportionally facing gender-related threats, harassment, and intimidation on the Internet compared to their male colleagues. The OSCE addresses this new challenge to freedom of expression and digital rights 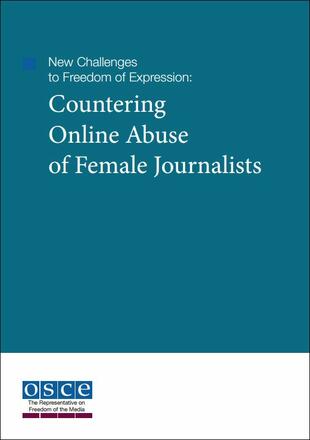 This publication by the OSCE Representative on Freedom of the Media helps framing online threats and abuse against female journalists within the broader context of gender discrimination and violence against women. It presents research, discusses the damaging effects on journalism and free speech, outlines the international human rights framework and state obligations, and identifies key factors in the effective prevention of and response to online abuse of female journalists. It also puts the issue into a broader context of misogyny and violence against women in our societies, calling for responses at all levels of decision and policy-making to address the root causes of this problem.

“With the intimidation of journalists online, it seems that the violence experienced by many other women in the “real” world has simply moved into the cyberspace without changing its basic nature”. The need to raise attention about the emerging pattern of online harassment against female journalists is considered from different perspectives, with the intention to make sure that journalists working online enjoy the same rights they have when operating offline. The threats are often sexual and violent in nature and include public shaming as a strategy with the objective to silence the journalist. Anonimity and trolling make these violations particularly difficult to tackle.

As pointed out by Caroline Criado-Perez, women are targeted by online abuse for the simple fact of raising their voice in the public sphere. Then, when reporting abuse to the local police, the risk exists of encountering staff which is not trained to deal with this sort of threats: the discouraging advice, then, could simply be to turn off one's own Twitter account.

As pointed out by Zorana Antonijević (OSCE Gender Section), “despite the fact that more and more women make their careers in the communication sector, they are still under-represented and only a few have attained positions at the decision-making level or in areas that influence media policy. The media cannot be said to be truly free and representative without the equal voice of women.