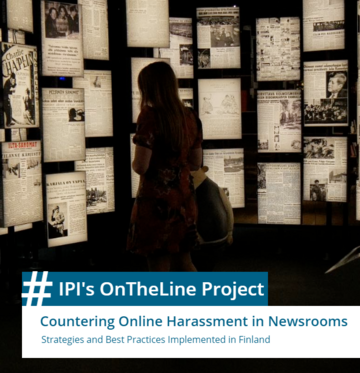 The report reveals, that articles related to immigration, asylum and Russian interference prompt the greatest number of online attacks on journalists. The online harassment increased with immigration levels in 2015-2015. Many of the online hate campaigns against journalists were aided by a propaganda website called MV-Iehti and in some cases even supported by far-right politicians. Journalists are raising concerns about the normalization of hate speech online in the society, as the line between hate speech and freedom of expression becomes blurred. This might be an outcome of changing media culture, as more journalists are being active on social platforms and becoming public personas, thus making the line between private and professional life stretched.

The measures taken in Finnish newsrooms vary from protocols to audience engagement. The public broadcaster Yle pioneered the audience dialogue approach, with hiring a team of specialists to engage with the audiences on different digital platforms, thus maintaining the dialogue, explaining and addressing the topics which raise the most anger, as well as introducing the people to the work of journalism.

The  report is a part of IPI project #OnTheLine, exploring the strategies and best practices of combating online harassment.