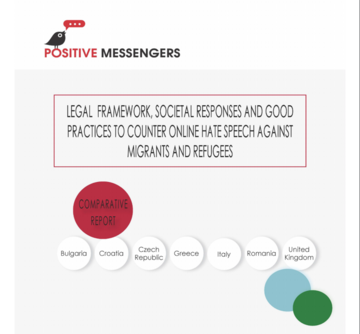 The report “Legal framework, societal responses and good practices to counter online hate speech against migrants and refugees” is one of the outcomes of the project. Given the lack of coherent statistical information regarding hate speech and/or hate crimes in the seven countries examined, civil society organizations have carried out most of such work. The available literature outline several correlations between increased hate speech and:

Despite proper legislative frameworks to countering hate speech are in place in most of the project countries, they are rarely implemented. For instance, all of the studied countries have transposed the provisions of the Audiovisual Media Services (AMSD) which prohibit content including any incitement to hatred based on race, sex, religion or nationality; however, sanctions are often ineffective so that “most country reports point out that the media contributes to spreading xenophobia”. The development of mobile apps or web solutions; information literacy projects; counter-narratives; support to victims; advocacy campaigns are some of the initiatives brought about by grassroots organizations in the seven countries to address the issue. Ten final recommendations highlight the need of law enforcement and reliable data collection.