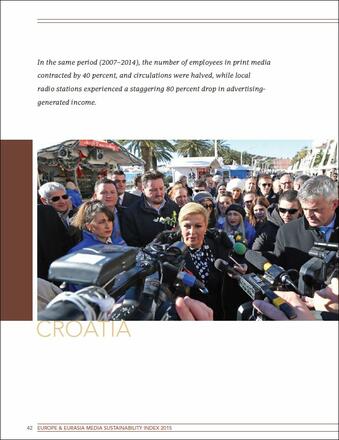 In Croatia, "in the period 2007–2014, the number of employees in print media contracted by 40 percent, and circulations were halved, while local radio stations experienced a staggering 80 percent drop in advertising generated income", the report notes. Yet, beyond the economic aspects, the most significant erosion registered in Croatia in the last years regards the notion of media freedom, under pressure in particular in the year 2014 in light of imminent political elections.

Five different objectives are assessed in this report:

With the exception of the first objective, “Free speech”, all other parameters considered by IREX have recorded a deterioration in the period 2010-2015, with the most notable decline concerning “Professional journalism” and “Business management”.

Comparative data are provided for each indicator in the time span considered by the report (2010-2015). The overall performance of the country is confronted with the developments registered in the other countries of the region. Since 2014, the has been no significant change in the overall situation of media sustainability in Croatia.

The Media Sustainability Index (MSI) is a product of IREX with funding from USAID.