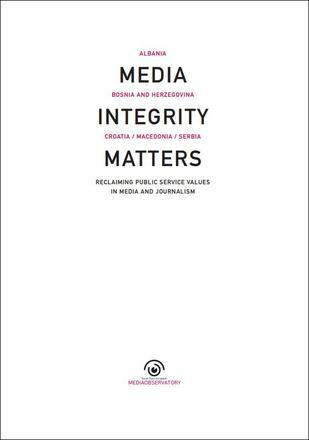 Issued in June 2014 and curated by Helena Popović, this chapter of the volume by the SEE Media Observatory examines several dimensions affecting the overall functioning of the media system in Croatia and their impact on media integrity in the country.

The first chapter focuses on the development of media policy and its implementation against the background of the influence exerted by political and economic powers, and the impact of such regulations on working conditions for journalists.

The media ownership structure is then analyzed, including the existing obstacles hindering transparency of media ownership. A special focus is devoted to a particularly controversial aspect of Croatian media market, namely the concentration and control of distribution and advertising.

The chapter on Media finances takes into account the different forms of media financing in Croatia, including State subsidies and advertising revenues.

Chapter 4 is devoted to the functioning of the Public Service Broadcasting, its regulation, challenges and the effects of the financial crisis.

Finally, with regard to the strengths and weaknesses which characterize the category of journalists in Croatia, this work considers the mechanism of journalists self-regulation, the working conditions as determined by job security and wages, and the strategies deployed to manage ethical issues.