Based on a series of interviews with journalists and media experts from Bulgaria, this report provides an overview of soft censorship in Bulgaria and suggests actions to reverse this trend 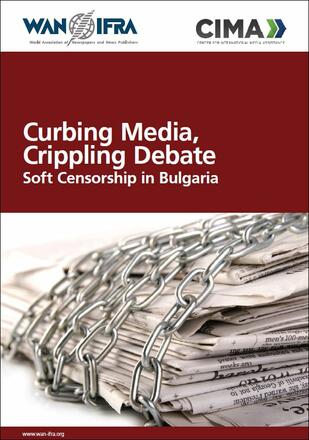 Notwithstanding constitutional and legislative guarantees, media pluralism and independence in Bulgaria have decreased significantly in the last decade: the country moved from ranking 35th in 2006 to be in the 106th position in 2015 according to the index by Reporters without Borders .

Much of this deterioration is due to the pervasive effect of soft-censorship, the practice of influencing news coverage of public authorities through selective allocation of public resources. More worrisome, these forms of soft censorship are more difficult to detect and address than traditional ones. Soft censorship generates lower level of international outrage compared with direct attacks on the press, yet it seriously affects the public debate.

As the financial crisis has significantly eroded commercial revenues for media outlets, increased dependency on government funding has turned into a powerful tool to control editorial policies, forcing newsrooms to avoid criticizing public authorities. Lack of transparency in the allocation of public funds and strong relations between private media owners and government officials further complicates the picture. Along with this, with high level of job insecurity for journalists in Bulgaria and the abuse of libel and defamation lawsuits to intimidate journalists, self-censorship becomes necessary for economic survival.

Among the recommendations formulated in the report, it is noted how external pressure, especially from the European Union and European Parliament, is the most effective tool for facilitating changes in the Bulgarian political, legislative and media system.

This report is part of the Soft Censorship Global Review, produced by the World Association of Newspapers and News Publishers (WAN-IFRA) in cooperation with the Center for International Media Assistance (CIMA), with the support from the Open Society Foundations. It was prepared by the South East Europe Media Organisation, based on the methodology developed by WAN-IFRA.