Defamation and Insult Laws in the OSCE Region: A Comparative Study 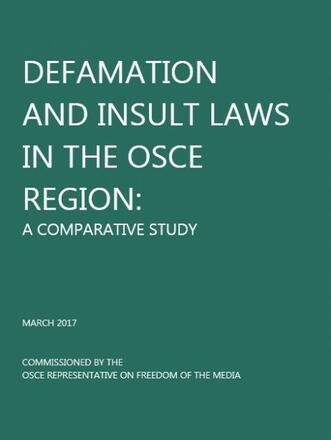 This IPI analysis of defamation and insult laws in the OSCE states offers a broad, comparative overview of the compliance of OSCE participating States’ legislation with international standards and best practices in the field of defamation law and freedom of expression.

The study is divided into two sections. The first section offers conclusions according to each of the principal categories researched and in reference to international standards on freedom of expression. The second section provides the detailed research findings for each country, including relevant examples, generally within the last 10 years.

The categories of regulations analysed by this study are both general criminal laws on defamation and insult and special laws protecting the reputation or honour of particular persons or groups of people (e.g., head of the state, public officials, deceased persons); special laws protecting the ‘honour’ of the state and state symbols; and blasphemy and religious insult laws.

On the one hand, criminal defamation and insult laws have been repealed in nearly a dozen states since 2009, and there has been incremental progress in other areas such as blasphemy. On the other, several states have recently strengthened criminal defamation laws or reintroduced them altogether, such as the Russian Federation.

With regard to criminal defamation and insult laws - which are on the statute books in three-quarters of OSCE participating States - this study offers evidence that these laws continue to be applied, including against the media, albeit with varying degrees of regularity. Imprisonment is a possible sanction in the vast majority of cases.  Particular problem areas remain Southern Europe (especially Greece, Italy, Portugal and Turkey), Central Europe (especially Hungary), Central Asia and Azerbaijan.

Moreover, nine OSCE participating States sanction defamation more harshly if the victim is a public official. Instead, there is widespread agreement among courts, international standard-setting bodies and CSOs that defamation laws should reflect the concept that public officials must be more, not less, tolerant of criticism than private persons. This study also recorded criminal laws prohibiting insult to courts and court officials, present in the criminal codes of 14 OSCE participating States.

A major tolerance is also expected, as to the international standards, for the cases of defamation of the head of state. A state’s interest in protecting the head of state “cannot justify conferring on him or her a privilege or special protection vis-à-vis the right to report and express opinions about him or her”, the ECtHR stated. This is true also for non-elected monarchs (e.g. Spain). Currently, 24 OSCE participating States criminalize the offence of the head of the state, and in all of them this crime is punishable with imprisonment.

With regard to the criminal defamation of the state, state symbols and state institutions, the laws under this category differ in that they aim to protect either objects (e.g., flags) or non-natural entities. Currently, 16 OSCE countries punish insult or defamation of the state, the criminal codes of 36 OSCE participating States contain provisions on insult and/or desecration to state symbols and sixteen states explicitly criminalise 'defamation' and/or insult of state bodies and institutions.

The study focuses then on the criminal defamation of the deceased: many of the provisions in this category are framed as intending to protect the “memory of the dead”. Instead, the ECtHR underlined that such an application would only succeed if the living claimant had been directly affected by the impugned publication.

With regard to criminal blasphemy and religious insult laws, these provisions are separate from laws that ban the incitement of discrimination or hatred on the basis of religion, although this distinction is not always clearly established in national legislation. Approximately 20 OSCE participating States (one-third) can be considered to have criminal blasphemy laws or religious insult laws on the statute books. In the vast majority of cases, imprisonment is a possible sanction.