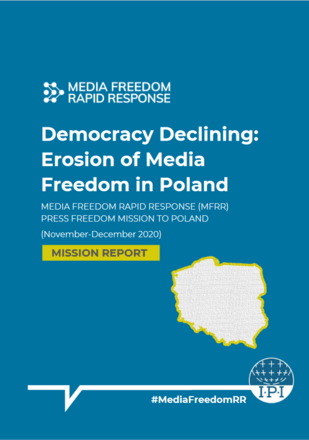 The conclusions outlined in this report reflect the findings of the recent joint press freedom mission to Poland carried out between November and December 2020 by the Media Freedom Rapid Response (MFRR). The mission was led by the International Press Institute (IPI) and joined by Article 19, the European Centre for Press and Media Freedom (ECPMF), the European Federation of Journalists (EFJ), Free Press Unlimited (FPU) and the Osservatorio Balcani e Caucaso Transeuropa (OBCT). The aim was to gather information about key developments for media freedom overthe last year and better understand the key challenges facing journalists.

The centre piece of PiS’ plans for media reform have been efforts to “repolonise” and “deconcentrate” the media market. Ostensibly aimed at creating greater pluralism, in reality these dual legal mechanisms are intended to concentrate more media under the control of the ruling party and its allies.

While physical attacks on journalists are rare in Poland, in October and November there was a clear increase in violence against journalists covering protests. Several were injured and some hospitalised after violence from both protesters and police officers. On some occasions, police hit or shot rubber bullets at journalists clearly identifiable by ‘PRESS’ insignia.

Five years of these continued policies mean Poland is now taking worrying steps down the path established by Hungary, whose government has in the last decade created and then exported a system of media capture unprecedented in the European Union. In a calculated cherry-picking exercise, PiS has selected parts of its model that are effective and found workarounds for those that do not fit the Polish system. The effect, as one interviewee noted, is that “free journalism is slowly dying in Poland.”