Democracy at Risk: Threats and Attacks Against Media Freedom in Europe. Annual Report 2019

This 2019 Annual Report by 12 Council of Europe partner organisations portrays the situation of the media environment in Europe, highlighting its most problematic aspects and their causes. It also provides an in-depth look into particular issues or countries and recommendations to ensure a better media environment

Publication Date: January 2019
Publisher: Council of Europe
Research and Editorial Team: Partner Organisations of the Platform to Promote the Protection of Journalism and Safety of Journalists
Link: Democracy at Risk: Threats and Attacks Against Media Freedom in Europe. Annual Report 2019 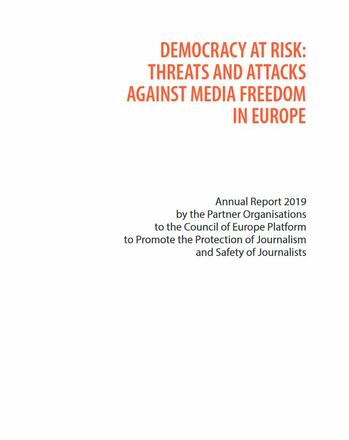 The 2019 Annual Report by the Partner organisations of the Council of Europe's Platform to protect Journalists and their Safety provides an overview of media freedom and its worsening framework around Europe. First, the report analyses the assault on press freedom in the Council of Europe region. In 2018, threats to journalists' freedom doubled compared to the previous year. This shows the gaps in the system, including repressive legislations on media outlets, inadequate funding, and the mis-protection of journalists' sources.

The report inquires into whether member states are responding to these alerts adequately in terms of the Council of Europe’s agreement with partner organisations. Accordingly, it stresses that countries like Italy, Turkey, Bosnia and Herzegovina, and Azerbaijan did not address any alerts in 2018. On the other hand, some countries like France or the Netherlands made effective efforts in protecting journalists under threat.

The Platform then analyses a series of topics which are found to be central for media freedom across Europe in 2018. The first is impunity, or rather “the failure by the authorities to investigate and prosecute those responsible for crimes and violence against journalists”, including physical attacks. In 2018 there were 26 impunity alerts, mostly in countries which had already experienced this kind of problems in the past. The partner organisations bring examples from Slovakia (Ján Kuciak  and  his  fiancée  Martina  Kušnírová), Malta (Daphne  Caruana Galizia), Ukraine (Pavel Sheremet), Bulgaria (Viktoria  Marinova), Russia (Maksim Borodin), and Turkey (Jamal Khashoggi) to underline that they are “concerned that a climate of impunity has started to take hold in parts of Europe”.

The Annual report focuses on few countries where the situation of the media faced a more serious deterioration in 2018: Turkey, Italy, the Russian Federation, and Hungary.
In Turkey, journalists face an unprecedented repression, characterised by arbitrary detention and torture. The majority of the journalists arrested face charges of membership in groups considered as terrorist organisations by the Turkish government. In 2018, the Turkish Constitutional Court decided that  two journalists were to be released. However, the (lower) criminal court paid no heed to the request, showing the collapse of the judicial system in Turkey and its lack of independence.
Italy was also notified several times in the past year because press freedom sharply deteriorated, mostly because of threats by Mafia and organised crime as well as by neo-fascist groups. Some of these threats came from deputy prime ministers, which are reported to use hostile language against the media.

According to several alerts related to 2018, Russian Federation authorities failed to take action against the violence faced by journalists. Several deaths under questionable circumstances (like Maksim Borodin's) were labelled as “suicides” by national authorities. This is accompanied by increasing control over information tools and websites, like Telegram.

Finally, Hungary's Prime Minister Viktor Orbán's reshaping of national media since his election in 2010 has left few independent media. Besides the continuous obstacles faced by these media, in November 2018, the owners of the vast majority of Hungary's pro-government media outlets announced the “donation” of their companies to a foundation, thus creating a large right-wing media conglomerate under the direction of a close ally of Orbán's.

These problems are faced by freelance journalists as well, which are especially vulnerable to determinate forms of harassment. Public media is also reported to be under attack in all of the Council of Europe Region through decreasing funds, restriction of the outlets’ mission and enactment of new legislation or regulation.

In 2019, the Platform will introduce enhancements for partner organisations to better track the safety of and actions against freelancers. Also the European Union and the Public Service Medias (PSM) have shown a certain concern over the increasing attacks on journalists. After the murders in Slovakia and Malta, the Platform asks the EU to live by its commitment to media freedom and the safety of journalists, welcoming however the efforts made by the European Parliament and the Council of Europe. Regarding the PSM, several countries that used to be considered “safe harbours” worsened the PSM environment in the past year by reducing resources, restricting outlet's missions, and enacting new legislation.

The Annual Report 2019 by the Partner Organisations is an important document which, by painting a disturbing picture of the increasingly urgent threats that journalists and media outlets have to face, calls on member states to take account of the measures to create a favourable environment for free and independent media, in the spirit of cooperation of the 2015 Memorandum of Understanding signed by the Council of Europe itself.